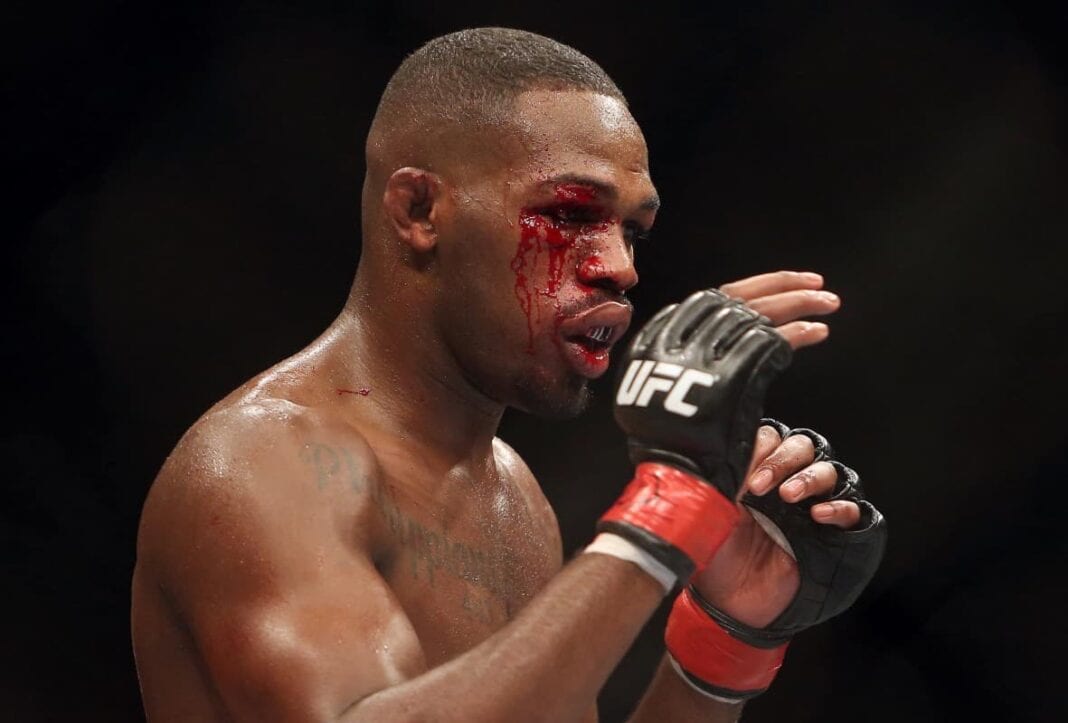 When UFC light heavyweight champion Jon Jones walks out to the octagon to face arch nemesis Daniel Cormier in the pay-per-view (PPV) main event of UFC 182 this Saturday night (January 3, 2015), he’ll be on the lookout for an historic and record-extending eighth straight 205-pound title defense.

But the stakes are much higher than that, as Jones and Cormier have an extreme amount of bad blood between them, stemming from their first-ever meeting to their long-held Twitter battles and culminating in their now-infamous UFC 178 Media Day brawl last August.

The brawl became an instant sensation and made the fight by far the most anticipated MMA bout of 2014, one that unfortunately fell apart when “Bones” required surgery for a torn meniscus and delayed it until now.

Jones has made his disdain for Cormier very well known, going as far to state that he would “kill” him if he indeed spit in his face as he had promised on their telling “hot mic” session that saw a side of “Bones” that Cormier insisted was the real champ all along.

It appears that Jones is finally settling into the bad guy role that he has seemingly been made for all along, and that’s giving this bout the massive hype and buildup that we just haven’t seen all that much during the injury plagued 2014.

Yet for all of Jones’ talk, the champ will be tasked with what could be his toughest-ever challenge in the octagon, and he’s faced and defeated a laundry list of elite 205-pound talent.

Undefeated at 15-0, Cormier is hell-bent on becoming UFC champ after he fell just short in the Olympics and the NCAA Division 1 Wrestling Championships.

That, coupled with his more-than-impressive skillset, could most definitely make Cormier the first man to defeat Jones in the UFC.

Let’s take a good look at the reasons why.

The obvious advantage of Cormier is his Olympic-level wrestling pedigree that saw him finish fourth in the 2004 Games. He went into the 2008 Games searching for gold as the United States team captain, but his body shut down after making weight and forced him to withdraw from the competition.

He also came in second place in the NCAA championships his senior year at Oklahoma State University, making him one of the most decorated mat technicians to ever set foot in the octagon. But those accolades are far from good enough for Cormier, and he plans on using his wrestling to become UFC champion after he saw greatness fall just within reach during his amateur background.

While it’s true that Jones is far from a slouch as a NJCAA National Champion, he just doesn’t have the overall wrestling skills that Cormier does. If “DC” can get on the inside and score some takedowns and/or make it an ugly fight in the clinch, Jones may be in for a long night.

Cormier made notorious heavyweight grappler Josh Barnett look light when he lifted “The Warmaster” high to win the Strikeforce Heavyweight Grand Prix, and he tossed fellow Olympic wrestler Dan Henderson around with ease at UFC 173.

Even with Jones’ mat prowess, Cormier will have a big edge.

Cormier appears focused on nothing other than obtaining the UFC belt right now; the same may not be able to be said about “Bones” at this point.

He’s faced and beaten some of the legends of the sport during his illustrious reign, and it’s only natural that some of the drive and hunger he maintained as an up-and-coming fighter has subsided.

That’s not to say that Jones has lost all motivation to fight and win, because he’s dominated all comers, and usually at their strong suit, throughout his record-setting string of title defenses.

However, it just doesn’t seem like he has that advantage of being the hunter rather than the hunted, and this time, he’s facing an opponent that will absolutely not be intimidated by Jones’ mystique before he steps into the cage.

Cormier has never even been seriously damaged in an MMA fight, let alone put in danger of actually losing. He’s been competing at the highest levels for many years, and he truly believes that now is his time.

It’s going to take a special effort from Jones to stop Cormier at UFC 182.

Before you cite all of Jones’ big wins over some of the best light heavyweights the UFC has ever seen, it deserves to be said that his accomplishments are already legendary and that he’s been dominant over some truly great former champions.

Yet his main advantage over all of those fighters was his massive reach advantage; something that simply won’t be as much of an edge as it was over fighters like Rashad Evans, Lyoto Machida, and Vitor Belfort.

Cormier has fought some of the most dangerous heavyweights on the planet. With wins over Barnett, Antonio “Bigfoot” Silva, and Roy Nelson, Jones’ size will have already been something that Cormier has faced and overcome.

Those fighters don’t have anything near the dynamic striking skills of Jones, but they are much bigger and more powerful, and Cormier ran through them with definitive ease.

He may not be able to do the same thing to Jones, but at the very least, his experience in beating some of the world’s best heavyweights will assist him greatly in his quest for light heavyweight gold.

At the core of reasons Jones could lose is his massive overconfidence, which lends to his belief that he can overcome any challenge to win any fight. It could definitely be said that it is both a blessing and a curse in this instance.

He showed the heart of a true champion in his UFC 165 war with Alexander Gustafsson, the first bout he was ever truly in trouble in.

But instead of granting “The Mauler” an immediate rematch due to the fight’s incredibly controversial nature, Jones instead made the “badass” decision to face off with Glover Teixeira, a shorter and slower slugger who had yet to face one Top 5-ranked opponent in his UFC tenure.

Of course he won that fight, but then he campaigned for Cormier and Gustafsson to fight one another to decide his next opponent until he finally signed on to face Gustafsson at UFC 178.

Cormier only got the title shot when “The Mauler” went down with knee surgery.

Jones may come off as supremely confident, but that public face may mask an air of insecurity. His actions would suggest that he believes he’s already won each and every fight before he steps in the cage. As his opponents get better, that isn’t going to cut it.

He obviously underestimated Gustafsson in a big way, and it could be argued that Cormier is the more dangerous of the two.

Cormier’s nearly flawless track record could lend to some overconfidence of his own, but he’s been humbled too much in wrestling to take his latest hurdle with anything but the utmost sincerity.

If Jones takes Cormier too lightly in Las Vegas, he could see the title belt strapped onto a waist other than his own for the first time in nearly four years.