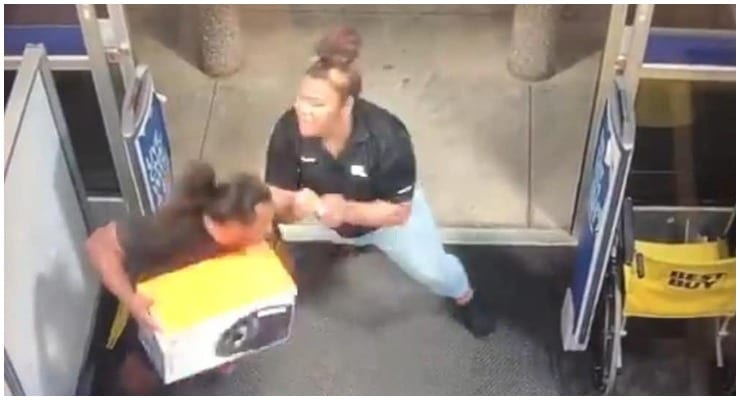 Best Buy employee Summer Tapasa-Sataraka thwarted an attempted robbery and went viral in the process. The 24-year-old can be seen taking down a man who is trying to leave the Aiea, Hawaii store without paying. She is expected to lose her job as a result of this incident. It appears Tapasa-Sataraka won’t be out of work for too long after catching Dana White’s eye.  Posting on social media the UFC boss praised her actions, offered complimentary tickets and claimed he wanted to offer her a job.

“She stopped this punk from getting away with stealing from BestBuy in Hawaii. She got fired for this. Flying her in this weekend and giving her tickets to the McGregor vs Cowboy fight. I WANT HER TO WORK FOR ME! Get ready for the best weekend of your life Summer.”

Speaking about the incident on Facebook Tapasa-Sataraka claimed the perpetrator had previously tried to steal from the store. She was reluctant to let him to it again during her shift.

“But when I recognized him when he came into the store, I kept my eye (the cameras) on him,” she wrote. “He went for the same speaker (and) when he saw that one exit was busy, he ran for the other one closest to me (and) I just kept thinking.. not today!! The fact that he’s so comfortable with just coming in (and) walking out with stuff is what I had to stop. Now he can (second) guess the next time he ever wants to come up in here and pull the same thing he did.

“I didn’t do this for anybody. Not for Best Buy. Not for the managers or the corporation. Not for Clout. I did this (because) he needs to know, this needs to stop.” (Transcribed by MMA Fighting)