The Nevada State Athletic Commission (NSAC) has come under extreme fire this past week for their absolutely absurd decision to suspend UFC welterweight, and middleweight Nick Diaz five years for testing positive for Marijuana.

The commission also has another big hearing waiting to happen with oft-criticized Rousimar Palhares, who has been deemed to be one of the dirtiest fighters in the sport after consistently holding onto submissions too long.

This act earned him his release from the UFC in 2013, and he quickly signed with WSOF where he has earned multiple wins by submission, some that were questionably. However, his last victory wasn’t questionable, as he clearly held onto his fight ending kimura way too long, also repeatedly eye gouging his opponent Jake Shields.

Another former UFC vet, Jon Fitch, happens to be one of Palhares’ past opponents in one of those questionable victories for “Toquinho” so to say. Recently speaking on the topic, Fitch actually blames the commission for letting it happen so many times:

“He’s taken a lot of dirty shots at people (by) holding on to submissions – he held on to mine, I think, a little bit too long – but I think the blame falls on the commission,” Fitch told MMAjunkie while in Phoenix for tonight’s WSOF 23 event. “I’m going to blame the commission first. This is the commission’s fault.

Continuing on, Fitch said that Palhares has never been punished, and that he has seriously hurt some fighters, which once again falls on the commission for not having taken any action thus far:

“That never happened with Palhares,” Fitch said. “He never learned his lesson. He was never taught a lesson. If you’re not going to punish a guy for his actions, he’s just going to keep doing it. … This falls squarely on the shoulders of the commission. It’s the commission’s fault.

“There are a lot of fighters who are injured. They could be fighters who had time taken off their career because of those injuries they received from submissions being held too long. I still have a bit of a limp in my leg that will probably be there forever. … But again, I don’t blame Palhares. I blame the commission.”

Could we see a lifetime ban handed out to Palhares whenever he stands before the NSAC? 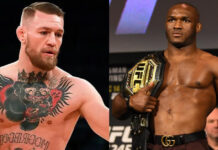