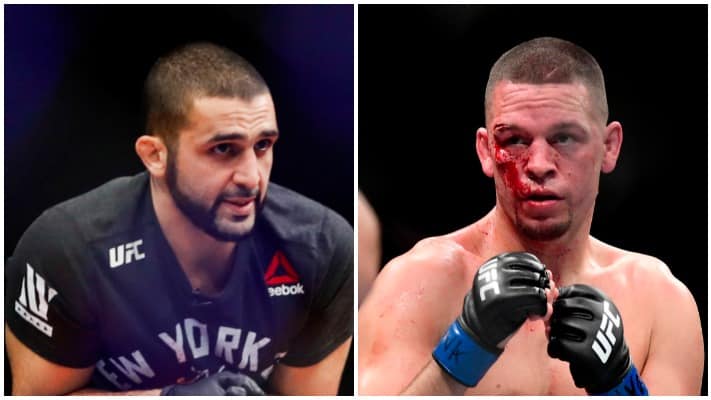 The UFC fan favourite fell to a decision defeat at the hands of Leon Edwards earlier this month. ‘Rocky’ dictated the majority of the 25-minute fight but was clipped by Diaz in the fifth and final frame. The Englishman was able to survive on wobbly legs to take home the win while Diaz walked away with a moral victory of sorts.

During a recent Q&A on the Tristar Gym YouTube channel, Zahabi insisted that Diaz would beat “99 percent of fighters” if there was no time limit.

“If you put (Nate Diaz) in a fight where there is no time limit, I think he beats 99 percent of fighters,” Zahabi said. “You can’t sub him. You can’t finish him. The guy doesn’t stop walking forward. He puts volume on you. He is the scariest, in my opinion, street fighter in MMA.

“I think if you had to fight him in the street, man, you are in a fight for your life. Ain’t going to be no judges standing you up between rounds. There’s no judge to come and give you the win. No, no. This guy ain’t going away. I think if he had a no time limit fight with Leon Edwards, he beats Leon Edwards – and I have a tremendous admiration for Leon Edwards.” (Transcribed by MMA Junkie)

Diaz has lost 13 times during his 33-fight MMA career but has only been truly finished on two occasions. In his seventh professional fight the Stockton, California native was caught in an armbar by Hermes Franca. It would be six more years before Diaz was stopped again. In 2013, Josh Thomson landed a brutal head kick and follow up strikes that forced the Diaz corner to throw in the towel.

Do you agree with Firas Zahabi? Does Nate Diaz beat 99% of fighters if you take away the clock?