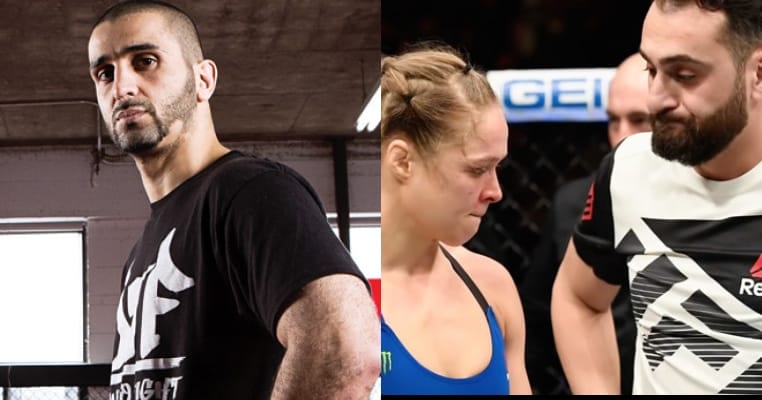 Ronda Rousey’s grappling skills have never been questioned. The former Olympic judoka has proven time and time again that she’s a wizard in the clinch, repeatedly throwing opponents to the canvas with ease once she gets her hands on them. On the mat, her submission skills have always been her bread and butter, as her patented arm bar has been the mark of death for many who have stood across from her.

Her striking, however, has seemed to certainly contribute to her sudden downfall. Rousey has lost two straight bouts, both by way of T/KO to Holly Holm and Amanda Nunes. Nunes, the reigning champion, needed only 48 seconds at Dec. 30, 2016’s UFC 207 to light Rousey up on the feet and score a victory.

Much of Rousey’s striking issues have been put on her longtime head coach Edmond Tarverydyan, who has become one of the most criticized coaches in the sport.

“I think Ronda has got power,” he said (Via Bloody Elbow). “What Ronda doesn’t have, is fluidity, a technical speed. She doesn’t have a smooth coordination. She’s very jittery, she’s very mechanical when she punches, and she’s very wild and telegraphs very much.

“Her punching level is not at an expert level,” he said. “However, is that her coach’s fault? I would say no, it is not.”

Zahabi then went on to compare Rousey to Olympic wrestler turned mixed martial arts champion Ben Askren in order to take some of the blame away from Tarverdyan:

“I know a lot of guys are blowing your tops off now, but it’s not his fault,” Zahabi explained. “She is not the first athlete in MMA to fail at developing a striking game.”
“I know what you guys are going to tell me, ‘Ben Askren is a better striker than Ronda Rousey. Maia’s striking is better than Ronda Rousey’s. Why is Rousey’s striking is very stiff and mechanical?’ Is it because of his coach? I don’t think it is.

“Before you start burning your computers, hear me out. Take for instance, Ben Askren, great fighter. His coach, Duke Roufus, is an extremely competent striking coach. No one can debate that, and he has proven himself over and over again. Why isn’t Asrken’s striking like Anthony Pettis? Is it Duke Roufus’ fault? No it is not.

“The reason why a Ben Askren or a Ronda Rousey’s striking usually — not always — doesn’t hit that high level, is because they’ve spent so much time wiring their brain and their body and their nervous system to fight in one particular way. It’s opportunity cost. Every time you do one thing, you’re costing yourself in another.”

In addition to Tarverdyan being criticized, Rousey has also been advised to join one of the larger MMA teams in order to round out her game. While Zahabi may not put all of the blame on Tarverdyan, he did admit that the coaching Rousey received against Nunes was ‘as bad as it can be’ and that perhaps the ex-champion should look to switch it up:

“Is it Edmond’s fault? I don’t think it is. But I think there are coaches out there that can do a much better job than what Edmond did. That I will agree with,” he said. “I don’t want to be negative towards anybody, but the job that he did out there against Amanda Nunes was as bad as it can be. That’s the legitimate criticism that I cannot defend.

What do you make of Zahabi’s comments?