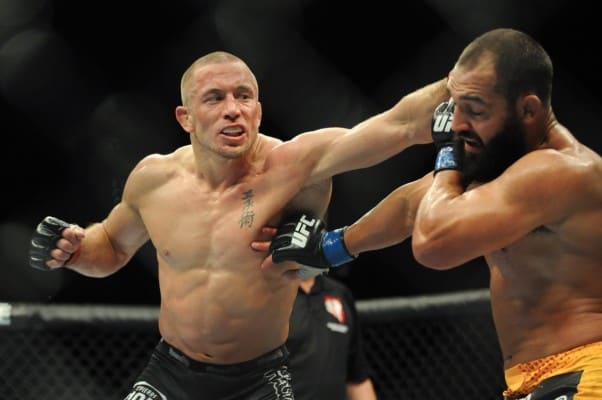 When Georges St. Pierre vacated his long-held welterweight title in 2013, many were shocked and wondering what had led the decorated champion to do such a thing. It turns out that personal problems along with the then lack of drug testing in mixed martial arts was the reason for his departure.

Ever since, questions have continued to spring up about when and if GSP would ever return. Soon after he exited the sport, he suffered another knee injury, but apparently rush is now “100% healthy” according to his trainer Firas Zahabi, who recently spoke with Inside MMA.

The UFC is also set to implement its all new USADA based drug testing program which is going to be more strict, and could be a step in the right direction to bringing the former champion back to the cage.

Speaking on his star pupil, Zahabi noted that St. Pierre is actually in better shape than when he was considered one of the best pound-for-pound fighters on the planet:

“He doesn’t have to take any breaks to do a lot of sport-specific training. He does a lot of fitness. Every time we train with him he looks in better shape than he was at his peak.”

Continuing on, the Tristar Gym head coach said that St. Pierre is still on a break, but comes to the gym often and works just as hard as anyone else. Zahabi added that GSP is training like he used to train, and that he foresees “Rush” making a return to the sport at some point, simply because he loves the competition:

As to whether the new drug testing program will influence a possible return, Zahabi said that it could, as that’s something that’s always bothered St. Pierre:

“Me and him both want the same thing. We both want this sport to be 100 percent clean. I think why originally he needed a break was because he had a very imbalanced life. It was just training all the time, sacrifice all the time. He needed to evolve and just have a personal life. But, the lack of drug testing is something that has always bothered him. He has always been suspicious of certain guys he’s fought. Let’s face it, how many guys have been caught in MMA on drugs? You know, there’s been a lot.”

Besides the drug testing, Zahabi was asked if there was anything else that could bring “Rush” back to the cage. The long-time trainer stated that GSP is not so interested in the title, but it would have to be a big fight:

“When they put his name on a poster again there’s gonna have to be another colossal name, an historical name next to it.”

Whether St. Pierre returns or not, and whether he ever fights for the belt again or not, the welterweight title could be heading back to Canada very soon, as GSP’s long-time teammate Rory MacDonald is set to challenge current title holder Robbie Lawler at UFC 189 on July 11, 2015.

Zahabi has full confidence in MacDonald, noting that the “Red King” could be the next GSP:

“Well, I think he started really young. He started training heavily at 15, had his first fight at 16. A professional fight, that’s something extraordinary. Me and Georges would just put him through the ringer. He would grapple with me, grapple with Georges, put the gloves on and we’d spar with him and he’d come the next day. You know, I think he can be [the next GSP]. You can do everything and never reach that kind of level that Georges did. But you gotta have that something, you know, and that something is very hard to put your finger on. What is it? And I think Rory may have it.”

Will St. Pierre ever return to the welterweight division he ruled for so long, and can MacDonald bring UFC gold back to Canada?