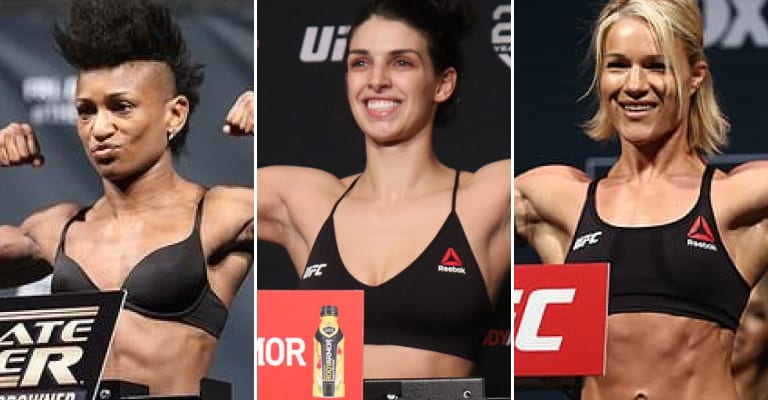 Brazilian submission specialist Mackenzie Dern has skyrocketed through the strawweight division and has now broken into the top 15, but not everyone supports her presence in the top 15.

Especially Angela Hill and Felice Herrig, both of whom were bounced out of the top ten rankings to make room for Dern.

Both women recently took to social media to express their contempt for Dern’s presence on the strawweight top 15 rankings:

Well this is a big fat slap in the face. I’ve fought top competition, beat #14 and the rankings finally grace me with #15 ranking, just to get bumped by a fucking Flyweight. pic.twitter.com/ZYlP5Ogs6w

Dern blasted through UFC 224 opponent Amanda Bobby Cooper with a nasty overhand right immediately followed up by a lightning-quick submission in the first round. However, Dern missed weight for that fight by seven pounds, coming in at a whopping 123 pounds for a 115-pound contest. Cooper accepted the catchweight bout regardless, and the rest is history.

UFC 224 marked the third time in Dern’s undefeated MMA career that she’s missed the strawweight limit, and even though the submission ace sports an impressive 7-0, the Cooper victory wasn’t actually a strawweight fight, making Dern’s ascent into the top 15 dubious at best.

Hill and Herrig rightfully put Dern and the UFC voters on blast for it, criticizing Dern’s replacement of Hill in the rankings. The overall themes of their criticism revolve around the fact that Dern didn’t even come close to making the strawweight limit and that other strawweights are far more deserving of Dern’s ranking and promotion.

Is Dern’s ranking legitimate or is it a product of the UFC marketing machine?