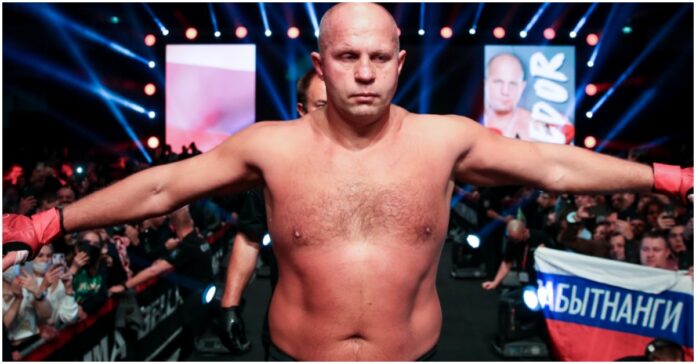 Fedor Emelianenko is hoping he’ll get the chance to avenge one of his losses before retiring from the sport of MMA.

The Russian fight legend wants to retire as the Bellator heavyweight champion but only if he is able to dethrone Bader who will face Emelianenko’s teammate Valentina Moldavsky in a heavyweight unification bout at Bellator 273 on January 29.

“That’s what Fedor asked me,” Bellator president Scott Coker told MMA Junkie. “He’s like, ‘If Ryan beats Moldavsky, I want to fight Ryan Bader.’ That’s what he said. I said, ‘Well, let’s talk about it and I’ll give you some other possibilities in the beginning of January, then let’s see how the fight unwinds and we’ll make a business decision, Fedor. How about that?’ And he said, ‘OK.’ And that was it.”

Emelianenko, 45, fell short in his lone crack at Bellator gold. ‘The Last Emperor’ suffered a 35-second TKO defeat at Bellator 214 in January 2019 when he first fought Bader. Emelianenko has a good record in rematches throughout his career and is confident he can top off his career by beating Bader and becoming a champion once again.

Even if things don’t work out in the way Fedor hopes, Coker assures that he has big plans for former long-time PRIDE FC champion who he is determined to give a brilliant send-off.

Emelianenko rolled back the years in 2021 when he sensationally knocked out Tim Johnson at Bellator 269.

Prior to that, he stopped Quinton ‘Rampage’ Jackson inside one round to bounce back from his loss to Bader.

Do you want to see Fedor Emelianenko vs. Ryan Bader II?