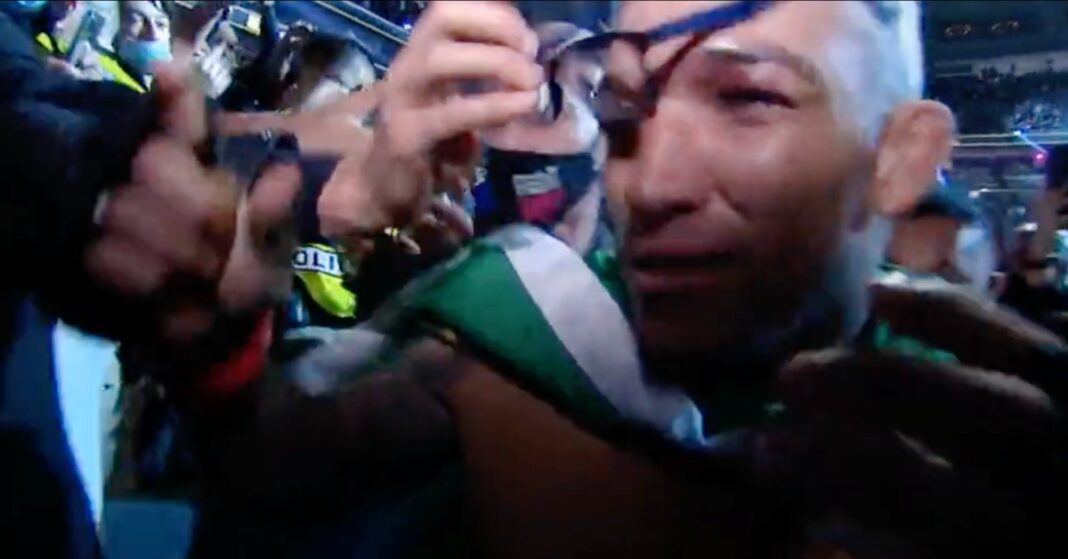 Following his impressive UFC 269 lightweight title defense against Dustin Poirier on Saturday, Charles Oliveira had his glasses stolen from him momentarily during his walk from the Octagon by a fan, before security from the promotion managed to retrieve them for the Brazilian.

Spending almost the entirety of the first round standing opposite Lafayette puncher, Poirier, Oliveira targeted the challenger’s body with a series of front kicks and some real notable knees in the clinch early and often in the round, before stepping in with elbows and uppercuts.

It was not entirely plane sailing for the Sao Paulo native in the opening frame, however, as Poirier did, in fact, manage to secure a knockdown via a right hook during an exchange.

In the second round, Oliveira showcased his grappling and top control prowess – securing a position in Poirier’s full guard following a scramble. From guard, Oliveira smothered Poirier with top pressure, as well as laying down a slew of blunt, flattening elbows.

Early in the third frame, Oliveira would fake and then transition from a single leg setup to a bodylock, scaling Poirier’s back at the fence, establishing hooks, before clasping his hands for a rear-naked choke finish.

The victory came as Oliveira’s stunning tenth consecutively, and he extended his lead as the most prolific submission artist in the history of the organization with his fifteenth separate stoppage.

Following the victory, Oliveira, flanked by security officials from the promotion, celebrated with fans before the entrance tunnel, before one eager spectator made a grab for the Brazilian’s glasses.

“He wanted to take them and wear it,” Charles Oliveira told assembled media through an interpreter. “We got them back. The security guys from the UFC took them back.”

“If this is me without having 100% vision, imagine if I had that,” Charles Oliveira said. “My vision never really got in my way. Everyone knows I wear glasses. But when I’m in the Octagon I can see my opponent and I can fight completely normally, so I guess my vision hasn’t gotten in the way of anything so far. I wear glasses all the time and it’s funny that in the fight it’s never beena  problem for me. It’s kind of crazy.”