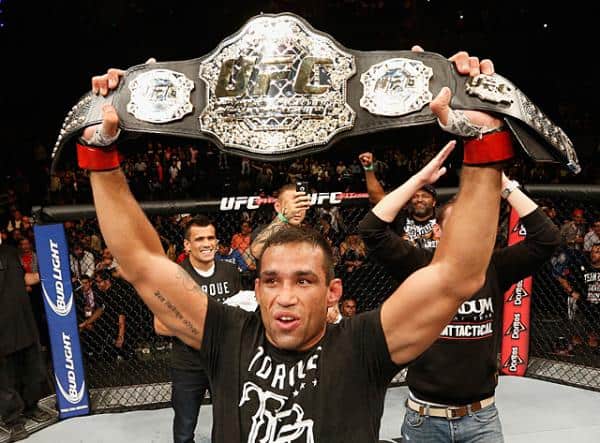 UFC heavyweight champion Fabricio Werdum is currently enjoying the best form of his storied career. Having recently wrecked long time heavyweight boss Cain Velasquez at UFC 188, ‘Vai Cavalo’ has a plethora of great contenders to challenge for his belt, and three include rematches in the form of Cain Velasquez, Andrei Arlovski and Junior Dos Santos. ‘The Pitbull’ defeated Werdum by decision at UFC 70, and ‘Cigano’ made mincemeat out of the Brazilian grappler at UFC 90. After granting Velasquez an immediate rematch, it seems like Werdum has changed his mind a little.

With divisions in the UFC mostly being held up by injuries, it’s disappointing to learn that the new heavyweight champion is nursing a few knocks of his own. ‘Vai Cavalo’ tells Ariel Helwani of MMAFighting.com that he doesn’t know if he’ll fight again this year:

‘All fighters have injuries, I have some old injuries so it’s very hard to fight so soon, I need to relax a little bit. I want to enjoy my belt. I think I re-watched the fight 1000 times, I watch myself, and then Velasquez and all the fans ringside. I don’t know if I’ll fight again in 2015, we’ll see, I want to see my family.’

That sucks. Werdum then goes on to reveal that he has been filming the new Kickboxer movie with GSP and JCVD, and also that he in fact wants the four top heavyweight contenders, including Stipe Miocic, to battle it out and create two clear challengers to his new belt:

‘I’ve been filming the Kickboxer movie with Jean Claude Van Damme and Georges St-Pierre, two really nice guys. I’d like to get back to training now, I think some good fights in the division right now is Cain Velasquez vs Stipe Miocic, Junior Dos Santos vs Andrei Arlovski, and then I’m just waiting. I think it’s a good idea just waiting a bit.’

It’s not often that a newly crowned champion decides to just chill for a bit, and it’s probably not very helpful to a promotion that has suffered from injury crisis all too often in recent years. In summary, Werdum reponds to Luke Rockhold‘s criticism of his persona in the leadup to UFC 188:

‘I think I win (a rematch with Arlovski)it’s a good fight. (Cain’s manager) said he was 100% the best shape ever, this was just my turn. I don’t like Luke Rockhold, he changed, he is arrogant, cocky.’

There you have it, Fabricio Werdum will likely be out of action until next year, he’d most like to fight Andrei Arlovski next, but only after the Belarusian banger wins a fight with Junior Dos Santos. Did anyone tell him ex-opponent Fedor Emelianenko is planning a comeback?

Stay tuned to LowKickMMA for more UFC news and updates!