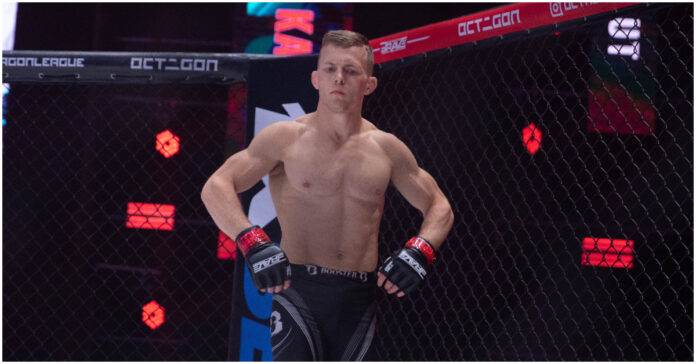 From competing in small-town shows in Canada to preparing to headline BRAVE CF 57 in the Kingdom of Bahrain, Brad Katona’s MMA career has been nothing if not eventful.

This week, the Canadian, who fights out of SBG Ireland, returns to action when he takes on Bahrain’s Hamza Kooheji for the vacant BRAVE CF bantamweight title on Friday, March 11, inside the Khalifa Sports City Arena. It’s an important bout for Katona, who wants to establish himself as one of the world’s best bantamweights. However, as he readies himself for his first world title fight, he is still able to take a moment and enjoy the situation he finds himself in.

“It’s from prairies in the middle of kind of nowhere to Bahrain and then flying back and calling Ireland home. It’s all so alien and so exciting that you have to be grateful for it, ” Katona told LowkickMMA.

This week’s fight will be Katona’s third bout with BRAVE CF after he signed with the promotion in 2021. He picked up a second-round submission victory on debut at BRAVE CF 50 before defeating Kazakhstan’s Bair Shtepin via unanimous decision at BRAVE CF 53 to secure his title shot.

Katona rose to fame in 2018 after defeating Jay Cucciniello to win The Ultimate Fighter 27. He then scored a victory over Matthew Lopez at UFC 231 before consecutive losses saw him released from the UFC. The 30-year-old has bounced back in impressive style, and this week’s fight offers him the perfect opportunity to remind MMA fans of the talent he brings to the table.

“We’re not looking past Hamza; we’re looking through him, as a teammate of mine says. But the journey doesn’t end here with the belt. It ends when my legacy is built over the years,” Katona explains.

” I have been saying it since I started. I’m going to be one of the best, if not the best, bantamweights in the world. And claiming the BRAVE world title, I think, is a good start to that.

“It’s something my team wants. John Kavanaugh really wants that BRAVE belt, and I already brought them one Ultimate Fighter trophy, so I might as well bring them the BRAVE championship.”

If you had to sum up Katona’s approach to MMA, the word scientific quickly springs to mind. The Winnipeg native has a degree in mechanical engineering and has transposed what he learned at University to the world of MMA.

” It’s this continual improvement, the Kaizen mentality of always trying to seek improvement and take away weaknesses, “he explains.

“Competition is one aspect of that where I can improve and test. In the training room, you’re prototyping, you’re studying, and then you have to test because everything works in theory. We do our simulations, and we do our spar, we do all that. You are putting the prototype in the wind tunnel, but at some point, you got to build the plane and fly. So that’s what we’re doing, So I love that approach. “

The scientific approach will be helpful when it comes time to step into the cage with Koohej. The 29-year-old Koohej is riding a four-fight winning streak and, according to Katona, is somewhat of a shapeshifter who can adopt different styles. It means that Katona may need to have multiple strategies on hand, depending on what version of Koohej shows up.

On Friday, Koohej can claim the bantamweight title and make history by becoming the first Bahrain-born combat sports world champion. It adds an extra element to the fight, and Katona is intrigued by how it impacts his opponent.

However the fight unfolds, you can bet that Katona will be ready for it and will be relishing the chance to solve one of the most challenging puzzles in the BRAVE CF bantamweight division.

How do you see this fight going down at BRAVE CF 57?