LowKickMMA.com
Home Bellator News EXCLUSIVE | Matt Mitrione Thinks Its Time To ‘Get Back To Work’ 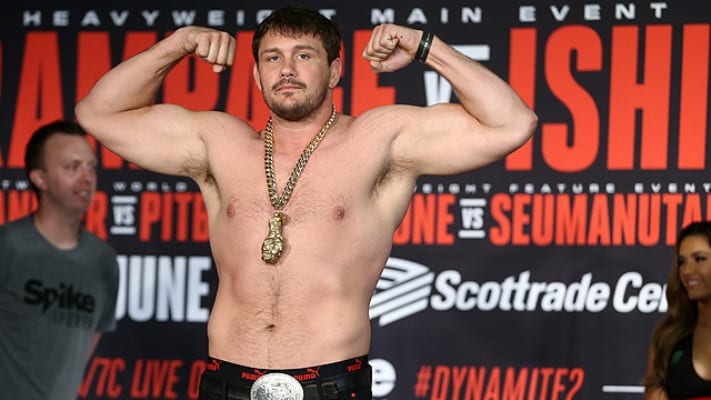 Matt Mitrione admits he was relieved to hear Bellator 241 was cancelled but insists he’s ready to get back to fighting amid the COVID-19 pandemic.

Former NFL star turned heavyweight knockout artist Mitrione was due to face Ronny Markes at Bellator 241 on March 13. He accepted the fight on two weeks’ notice after Josh Barnett failed his medical and was forced to withdraw from the card. Unfortunately for fight fans, the event was cancelled just a few hours before it was scheduled to begin.

Speaking exclusively to LowKickMMA Mitrione admits despite being ready to fight, he was a little bit relieved upon hearing the news, mainly due to the uncertainty surrounding COVID-19, he said.

“We were mentally and emotionally ready to go compete and go perform. Then we found out it got cancelled. It was about three hours or so before the show was going to start. I mean, honestly, there was a little bit of a relief because there were so many more questions than answers at that time about what was happening. So as a result of that, it was kind of a breath of fresh air.

Now some time has passed Mitrione wants to get back to fighting. The 41-year-old power puncher is keen to put on a show for people during the lockdown, he explained “I think now’s the time for us to get back to work. I think if you’re cool with fighting right now and signed a name on the dotted line and let’s go ahead and make some matchups and let’s get down. Let’s let the world watch us.”

Mitrione took time out to praise his former boss Dana White for doing everything in his power to hold events and keep the UFC relevant right now.

“I think if the fighters are willing to go compete, then yes, he’s doing the right thing. I think that Dana’s a trailblazer he always has been.  Dana’s not afraid to be Dana. I think that’s what has made UFC so successful. And I think that is what he has established and shown once again that what he feels he wants to do, he is going to.

“I don’t think anybody’s going to be fighting that doesn’t feel comfortable fighting at all. I mean look at Rose. She lost a couple of people do the coronavirus and bailed and nobody gave her any slack about it whatsoever.

“Some people were uncomfortable here, but I think we understand a lot more people are comfortable and are ready to get back to work. And that’s what he wants to capitalize on. I mean, think about it. He’s the only show in town and everybody in the world is even more aware of UFC than they were beforehand because Dana keeps him in the media presence constantly.

While you wait for more fights be sure to check out Bellator MMA Recharged on CBS Sports Network and relieve some of the best fights in Bellator history.

Do you agree with Matt Mitrione? Is it time to get back to work?