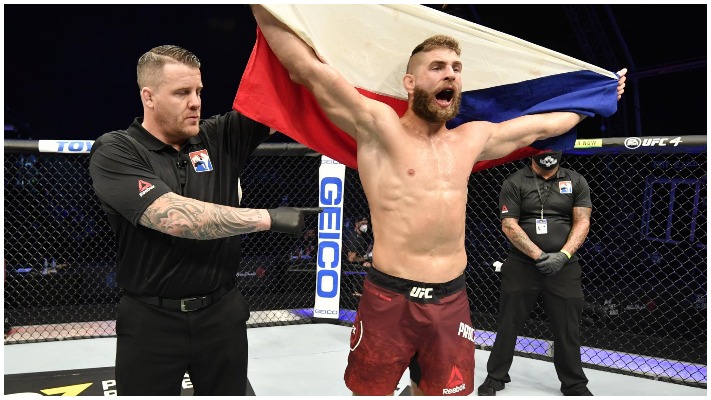 Jiri Prochazka is looking forward with glee to the UFC Vegas 38 main event.

On Saturday, two of Prochazka’s light-heavyweight rivals will square off.

Thiago Santos will be looking to end his three-fight skid when he squares off fellow Brazilian knockout artist, Johnny Walker, who is hoping to continue his run of good form after impressively stopping Ryan Spann inside one round last time out.

Ahead of UFC Vegas 38, Prochazka explained why he is so excited to watch Santos and Walker throw down.

“I am curious (to watch) that Thiago Santos performance because he can show much more than he showed with (Glover) Teixeira,” Prochazka told LowKickMMA.

The Czech fighter isn’t expecting a technical match-up this weekend but does expect two of the most powerful guys at light-heavyweight to bring the heat come fight night.

“I want to see that fight. I will watch it because both of these guys they fight from the heart. They fight with big power in the hands and I like it because they don’t use the strict boxing or Thai boxing technique. They use the full power of the body. Like, what is most important in this fighting world and I like it.

Prochazka stopped short of predicting the UFC Vegas 38 main event and will instead sit back, relax and enjoy like the rest of us fight fans watching at home.

The 28-year-old will serve as backup for the UFC 267 main event on October 30. If either Jan Blachowicz or Glover Teixeira fall out for any reason he will step in as a replacement.

Are you as excited as Jiri Prochazka is for the UFC Vegas 38 main event?