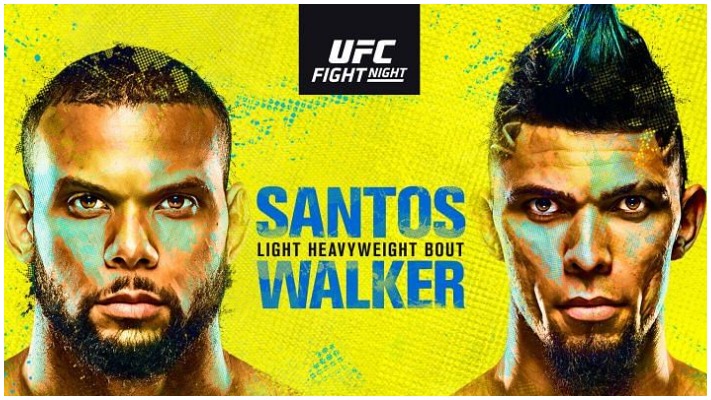 UFC Vegas 38 takes place this weekend in front of a small crowd at the APEX in Las Vegas, Nevada. In the main event, we have an exciting light-heavyweight match-up between Brazilian KO artists Thiago Santos and Johnny Walker that we love almost as much as fast payout casinos. The winner will move one step closer to a shot at the 205lb title which will be on the line when Jan Blachowicz and Glover Teixeira square off at UFC 267 next month.

UFC Vegas 38 also boasts a strong undercard that promises to deliver plenty of big moments. Join LowKickMMA as we preview, predict, and hopefully win some money betting on the fights.

For us, the main event while fun on paper is something of a mismatch. Thiago Santos has been an elite-level light-heavyweight fighter for some time. After a little time away from the sport and three consecutive defeats you may lose faith in him, but we will not. We’ll be adding him to our bet at odds of -175. ‘Marreta’ may not be able to compete with the top fighters anymore, but Johnny Walker is not that. The eccentric Brazilian has failed every time he’s stepped up his level opposition and Santos is a cut above the guys who have been beating Walker in the UFC. If you fancy Walker to cause an upset you can get him at +150.

At the end of 2020 everyone was talking about Kevin Holland as a Fighter of the Year candidate after he put together five straight wins to cement himself as a true middleweight contender. Unfortunately for him, the wheels have come off in 2021 and he has been dominated over five rounds by Derek Brunson and Marvin Vettori. A drop down in opposition is necessary if he hopes to regain the momentum that saw Dana White named him as one of his top three fighters to watch in 2021. Despite his recent poor performances, Holland enters UFC Vegas 38 as the -150 favourite. His opponent, Kyle Daukaus, is relatively new to the promotion and has failed to deliver since joining, winning just one of his first three fights. At +125 the bookmakers aren’t totally writing him off in this bout and neither are we. However, we will be betting on Holland to get the job done on Saturday night.

We just wish you could bet on who will get the performances bonuses because this one has Fight of the Night written all over it. Alex ‘Cowboy’ Oliveira and Niko Price are two all-action fighters who are almost always involved in brawls. Despite his ugly recent record, we will be backing Price at -150 in this one. ‘Hybrid’ has got several high-profile wins on his record, some of them even hold a win over his UFC Vegas 38 opponent. Price has what it takes to work his way into the welterweight ranks. Oliveira’s day seems to have come and gone. So, we’d advise you to avoid betting on him, especially at odds of +125.

Opening up the UFC Vegas 38 main card we have an exciting bantamweight match-up between Aspen Ladd and Macy Chiasson. On paper, it seems a pretty straightforward fight. Ladd is the younger and more talented fighter with a genuine shot of holding UFC gold in the not-to-distant future. However, she’s been out for almost two years, so it’s hard to predict who will show up this weekend. We are gonna put our faith in her at relatively short odds of -200. But don’t be surprised if Chiasson causes an upset. If you think that might just happen, she’s priced at +170.

Who will you be betting on at UFC Vegas 38?