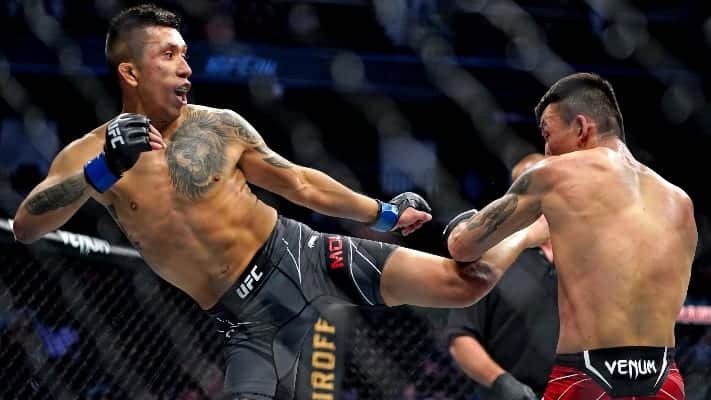 Jeff Molina is a born fighter. From the time he was in his teens, Molina knew that he wanted to achieve his ultimate goal of fighting in Mixed Martial Arts’ biggest stage: the UFC.

After earning a UFC contract by defeating Jacob Silva on Dana White‘s Contender Series and his unanimous decision victory over Aori Qileng at UFC 261, it appears that “El Jefe” is in the perfect spot in his life and career.

In defeating Qileng on Saturday in Jacksonville, Molina earned Fight of the Night from UFC president Dana White and brought home an extra ,000 for his efforts in the octagon. The 23-year-old said he wants to be smart about the extra cash and that he spoke with White about the fight beforehand, telling the boss to not miss it.

“I tapped him on the shoulder at the weigh-ins and said ‘Hey man, I heard you watch the early-prelims from a room? Don’t miss this one.’,” Molina told LowKickMMA. “The callout for the bonus after the fight wasn’t planned, I was just going off my intuition.”

It’s no surprise that Molina has garnered the attention of UFC fans from around the world with his quick rise in the flyweight division. Training at Glory MMA in Kansas City, Molina has basked in the knowledge he’s gained from veterans such as women’s flyweight Gina Mazany, fellow flyweight Tim Elliott and head coach James Krause.

Molina singled-out Krause when dishing out credit for his victory during his post-fight press conference, and the glowing reviews continued a few days removed from the fight.

“No other coach has put in the time with his guys and showed the amount of improvement with his team,” Molina said. “We still got a lot of the year left to go, and it’s only going to go up from here.”

Molina’s family went wild after he earned the victory, including his father; who is currently battling kidney cancer. Through the trials and tribulations that he and his family have underwent, Molina is glad to have put on a performance that made them proud.

“They were the first people I facetimed after the fight in my hotel,” Molina said. “They were on Cloud-9. They’ve seen the sacrifices I’ve made for this sport and they were so proud of me. That means a lot.”

Molina also said he wants to repay his family going forward with his UFC career and believes he’ll be a champion one day.

In terms of what’s next for the up-and-coming flyweight prospect, he wants to fight in late-July/early-August and compete against the winner of Ryan Benoit and Zarrukh Adashev, who fight on May 8th in a UFC Fight Night event.

“I wanna stay active, I wanna fight at least 3 times this year,” Molina said. “I got a couple of injuries I gotta get checked out, but yeah I wanna stay active. I’d love to fight the winner of Zarrukh Adashev and Ryan Benoit. I’m familiar with both of their styles. So maybe late-July, early-August.”

What are your thoughts on Jeff Molina’s Fight of the Night performance at UFC 261, and where the 23-year-old fits in to the reborn flyweight division?