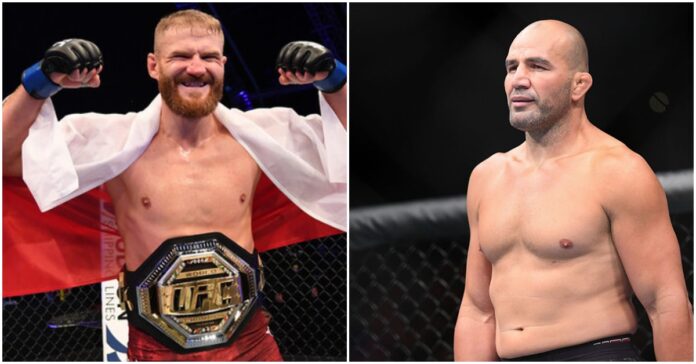 Jan Blachowicz insists he will not make the same mistakes past opponents have against Glover Teixeira when he squares off against the Brazilian for the light-heavyweight title at UFC 267 on October 30 in Abu Dhabi.

The 41-year-old was hurt in successive fights against Anthony Smith and Thiago Santos before he rallied back to score stoppage victories in both bouts.

During a recent interview with LowKickMMA, Blachowicz noted the durability of his next opponent and insisted he will not be rushing his work at UFC 267.

“You cannot be too fast because he is a smart guy, an old fox,” Blachowicz told James Lynch. “(He has) a lot of experience. He knows how to survive. He can grab you in his game so, you need to wait a little bit. Like (Alexander) Gustafsson, Gustafsson waited until the fifth round to knock him out. This is also something that I want to do. If I hit him hard, if I see that he will go down I will wait. ‘Okay, stand up, let’s go a little bit more.’ He will not catch me in his game. I’m going to be ready for it.”

The Polish knockout artist went on to liken Teixeira to another Brazilian legend who is known for being something of a wizard on the mat. Despite his high praise of Texeira’s ground game, Blachowicz insists it won’t be an issue come fight night.

“Every opponent is different, but I think that Jacare (Ronaldo Souza) is maybe a little bit similar,” Blachowicz said. “Maybe if (Luke) Rockhold will take me down (he’s) a similar level on the ground. But, you know, both of them will not take me down. So, Glover also will not take me down. My wrestling right now is really good. So, we will see. Like it told you, every opponent is a little bit different. Different style, different moves, so, I have to be ready for completely something different this time.”

Do you think Jan Blachowicz is right to be wary ahead of UFC 267?