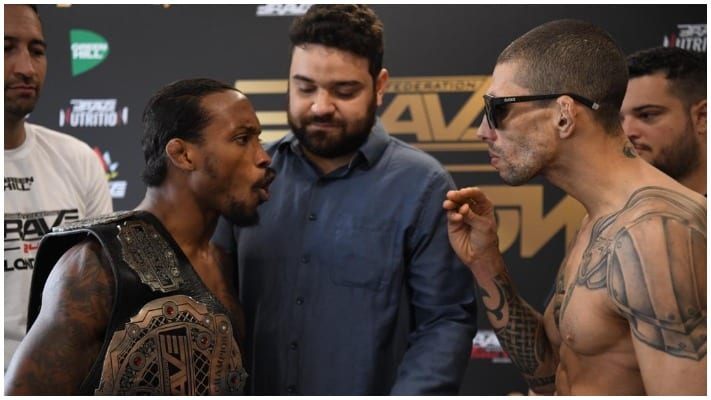 If Bubba “I’m A Bad Man” Jenkins has his way, the only changing of the guard taking place in the United Kingdom this week will be its appointment of a new prime minister. The American is set to mount the first defense of his BRAVE featherweight world title on Thursday, July 25 at BRAVE 24, and will do so against Brazil’s Lucas “Mineiro” Martins.

The main event bout will go down inside the Copper Box Arena from London, England. An exclusive invite-only audience will witness the clash, and for Jenkins, the fight cannot come soon enough:

“The body feels, anointed, that’s what I would say. It feels ready to go. I am twiddling my fingers at this point as far as preparation goes, “Jenkins said speaking to LowkickMMA.

“I have checked all the boxes I have done the things I needed to do. This is a long time coming, as far as like, it was written before the foundation of the earth; this is something I believe I am destined for. “

Martins comes into this contest on the back of a loss to former BRAVE Lightweight World Champion Abdul-Kareem Al-Selwady. The pair clashed last September at BRAVE 18 in a unification bout. At the time the Brazilian was the interim lightweight titleholder after previously defeating compatriot Luan Santiago at BRAVE 11.

Since then, the lightweight title has gained a new owner, and it just so happens to be a certain Luan Santiago who KO’d Al-Selwady at BRAVE 23 to capture the belt. It was a result that did not escape Jenkin’s attention:

“I know Lucas is a tough opponent. He is a champion he has beaten the current 155 champion. So I do know he is tough. I have all the respect for Lucas “Minero”,” Jenkins said.

“I am not sure why they think that , so there is a little bit of me looking at that and saying “oh OK you asked for this fight, you wanted this fight because you see there is a chink in my armor somewhere that you feel is easier to beat than the guy who you have already beaten at the weight you are normally at’.

“I just feel they want to do this for whatever reasons and I think I am the wrong mountain to climb. He may see me as a molehill, and I may be a grasshopper in his eyes, but it’s all about perspective because that molehill turns into a mountain if you are an ant. I don’t believe that he is the giant I am.”

Martins is a formidable striker with over half of his wins coming via way of stoppage. The 30-year-old is also an experienced BJJ practitioner. Still, it remains to be seen how he will fare against the elite grappling of Jenkins. For his part, while Jenkins respects his opponent’s skill set, he is not fazed by the challenge he faces:

“I do like to focus on my own game. What I do not fear I conquer, I know that to be a fact. “Jenkins said.

Jenkins is not only a fully committed and professional athlete. He is also a person of strong faith who believes he has found his calling in life:

“So many people are confused as to what they want in life. I truly know what I want. I want to go around the world, spread the gospel, share my talents, show love. With every event I bring my wife with me, we get our experiences that way, we get our memories that way,” he added.

Jenkins signs off the interview with a prediction as to how the fight will unfold:

“If he didn’t do what he was supposed to do, he will fall in two. If he comes for war wanting more, I put his lights out, and he snores in four.”

This Thursday, we find out just how accurate Jenkins is with his predictions. For fans based in the United States, BRAVE 24 can be watched via Fite TV.