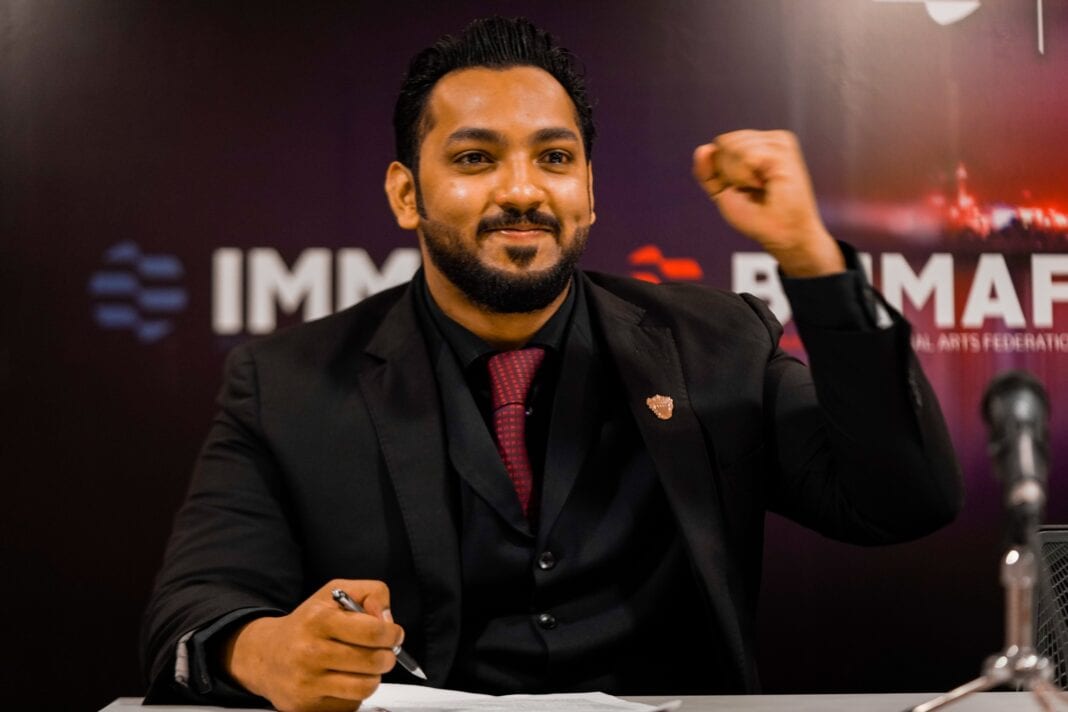 BRAVE CF officially launched its second Kombat Kingdom series last week, with BRAVE CF 47: Asian Domination taking place on Thursday, March 11. The Bahrain-based promotion has a further three events scheduled to occur over the next two and a half weeks. BRAVE CF 48 is scheduled for this Thursday, followed by BRAVE CF 49 and BRAVE CF 50 taking place on March 25 and April 1 respectively.

Since its inception in 2016, BRAVE CF has marched to the beat of its own drum as it has looked to establish itself in the highly-competitive world of MMA. From the start, the company’s focus has been on building a promotion truly global in nature and scope.

It has achieved this by signing a diverse roster of fighters and staging events in countries like Colombia, Romania, and India, where MMA is still in its infancy. BRAVE CF has also collaborated with several smaller MMA promotions, including Latin Fighting Championship, RXF, and Krepost Selection, to help establish MMA in new territories. It is these achievements that BRAVE CF President Mohammad Shahid takes pride in when looking back over the past four years.

“I don’t consider the number 50 as a milestone; it’s what we have accomplished with 50 events that gives meaning to the name BRAVE,” Shahid said to LowkickMMA.

“Traveling to 21 countries in 5 continents. Uniting the private sector and empowering the government body for MMA in every country we go,making the biggest amateur world championships and allowing [fans] the opportunity to see special talents like [ Muhammad] Mokaev, Shorty Torres, and Ramazan Gimbatov. But most of all, the seed that was put in the MMA industry to show that it’s time for this sport to take a new turn towards entering into the sports business from the event business. “

One area where BRAVE CF wanted to place a strong focus on was its scouting programs. MMA promotions are only as good as the fighters on the roster; the greatest marketing team in the world cannot cover-up a shallow talent pool. So, with this in mind, BRAVE CF set about creating an extensive and sophisticated network of scouts crisscrossing the globe in search of the best up-and-coming talent.

“Sports is always based on a structure where the scouting program has been the key to success. Not a team of matchmakers, whatever that means, looking at how marketable they are, their language and many other non-sports factors. We have established a global network of BRAVE CF scouting agents and a structure with 78 experts currently around the world scouting for BRAVE CF,” Shahid explained.

The program has already produced one bonafide star in the figure of Khamzat Chimaev. The Chechen fighter fought four times under the BRAVE CF banner before the UFC snapped him up. Chimaev may have been the first star the program unearthed, but he is unlikely to be the last. The work that BRAVE CF is putting in now could pay huge dividends in the future, especially as rising prospects like Muhammad Mokaev began to establish themselves on the world stage.

When asked what regions of the globe could be the next-in-line to produce future MMA stars, Shahid commented.

“Middle East, 100% and Africa I think are [ the next] areas. Although we see a few [other regions] are still heavily untapped, that’s how low global scouting programs of every other promotions are.”

When Covid-19 struck, BRAVE CF, like sports organizations worldwide, was forced to regroup and rethink its 2020 strategy. After starting the year with January’s BRAVE CF 34, the company had to wait six months before restarting its engine. However, when it did spark back into life, it did so in a major way. The promotion staged six shows in almost as many weeks with back-to-back events in Romania, followed up with four consecutive cards in Sweden.

The promotion then held its first-ever Kombat Kingdom series, which fittingly took place in the Kingdom of Bahrain. It was an impressive comeback, especially as it involved multiple countries and continents.

“It’s always challenging when we are facing the unknown. To be able to push through the pandemic doing events in Europe, more than any promotion, and establishing the Kombat Kingdom here in Bahrain is always a blessing,” Shahid said, speaking about the work him and his team undertook to get BRAVE CF up and running again.

The world may not be back to normal, but BRAVE CF appears to have found its groove. The company is regularly signing fresh talent as well as announcing new events. It will be interesting to see where BRAVE CF finds itself by the time BRAVE CF 100 comes around.