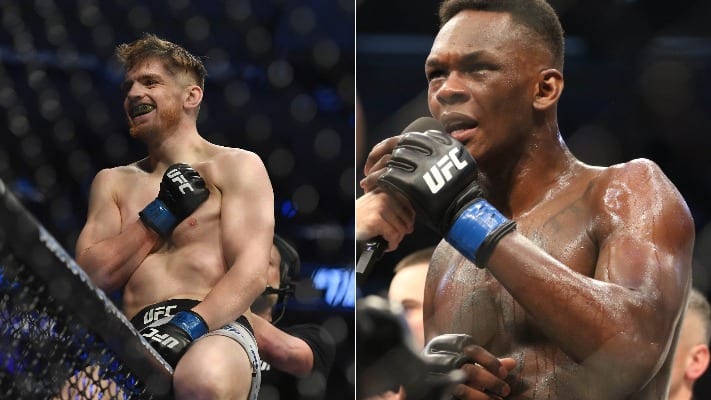 Edmen Shahbazyan is making waves in the UFC at the moment. Shahbazyan is on a three-fight streak in which all of his wins have come by way of a first-round finish. In his latest outing, Shahbazyan bested Brad Tavares with a head kick at UFC 244.

The finish actually caught the attention of UFC middleweight champion Israel Adesanya. Speaking on “The Joe Rogan Experience” podcast, Adesanya said he expects to see the 22-year-old standing opposite him inside the Octagon down the road. (H/T MMA Junkie)

“I saw his fight,” Adesanya said. “I didn’t know who he was until (my manager) told me. Then I rewatched his fight. He hit Brad Tavares with the head kick and that kind of got my attention, like, ‘Oh (expletive), who is this kid?’ At 185, he’s 22. He’s on the come-up. I played with Brad for five rounds. He starched him in one round. I’m not taking that lightly.”

Adesanya fought Tavares back in July of 2018. While Adesanya didn’t get the finish over Tavares, he did win in dominant fashion with a lopsided unanimous decision after five rounds. To see Shahbazyan get the job done in one round, Adesanya recognizes the young man is on the come up.

“I look at that kid – eventually when he comes up I’m sure I’ll see him at some point,” Adesanya said. “I need to get back to work. I’m working, but I’ve got the FOMO.”

Do you think Shahbazyan will meet Adesanya inside the Octagon down the road?