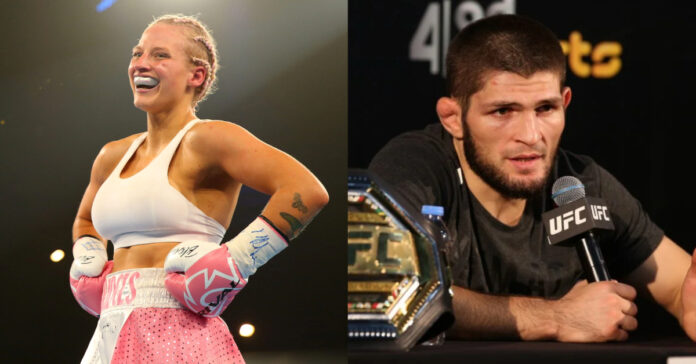 Since retiring from the sport Khabib has gone on to run his promotion in Eagle FC and therefore it should not come as a surprise that Khabib does not use ring girls in his promotion. Khabib’s opinion has come under fire from many people involved in combat sports after he questioned the need for them to be involved.

“I don’t want to offend anyone, ring girls are the most useless people in martial arts. What is their function? I have a question, you can show it is the second round that is on the screen.“

“There are people who understand martial arts and they are walking. This is my personal opinion Do they develop the sport? Or they help people to see it is the second round now? I realize that it is a history. History knows many mistakes. We read history to avoid mistakes of the past in the future. If we look in the history it says they are useless. That is my personal opinion.” (H/T The Mirror).

Disagreeing with the comments made by Khabib, Ebanie Bridges, who is a former ring girl herself responded to the former UFC lightweight champion’s remarks, reminding those who may share the same sentiment that the girls in these roles are there because they simply love what they do.

Taking the time to speak on Pub Talk, Bridges reminisced on her own experiences as a ring girl and how she felt it was unnecessary to try and take away these roles from the people who are involved.

“I was a ring girl. I love combat sports, I grew up with it, so for me to be at the fights, I loved it. I got paid mad money, probably more than some of the fighters to sit ringside.

“I’d be walking around in a G-string – they don’t do the G-strings these days but back in my heyday, that’s how we used to do it. Why are people who aren’t us, trying to take our jobs away from us? We love it, I loved being a ring girl. I don’t think it’s useless. I loved being part of the entertainment, being paid to watch those fights.”

“You’ve got people saying it is sexist, it’s objectifying. Maybe I want to be objectified. Maybe I want to make money, don’t make my mind up for me. You can’t have boxing without the ring girls.” (Transcribed by Mirror)

Ebanie Bridges is not the only person to come to the defense of ring girls being involved in combat sports. UFC flyweight champion Valentina Shevchenko shared the same opinion as Bridges and referenced their involvement throughout the history of combat sports and the value they bring.

Although you should not expect to see ring girls being involved at Eagle FC events the rest of the combat sports community still clearly those individuals and the job they do as a vast majority of major combat sports promotions still have these types of positions in place.

What do you make of Khabib’s comments?