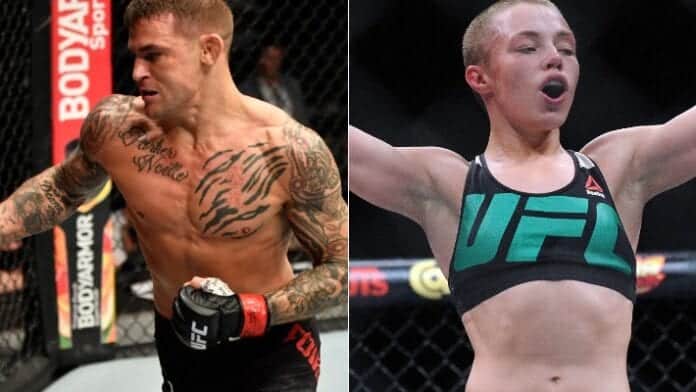 Super Bowl weekend is approaching, which means on top of the Lombardi trophy being handed out, a number of high-profile commercials are set to air. As it turns out, this year’s NFL championship will have something for UFC fans, as Dustin Poirier and Rose Numajunas are set to make an appearance.

The finale of the NFL season is one of the most-watched sporting events in the world, with the 2015 Super Bowl drawing in over 114 million viewers. This year’s Super Bowl could challenge that record as the Tampa Bay Buccaneers – led by arguably the greatest of all-time, Tom Brady – take on the man many predict will one day overtake that title, Patrick Mahomes, and the Kansas City Chiefs.

With a 30-second ad during the game costing about $5.6 million, companies usually go all-out with their commercials during the event. In a spot for guaranteedRate Mortgage entitled “Believe You Will“, Poirier and Numajunas are featured alongside NASCAR’s Ryan Newman and figure-skater Starr Andrews, among others.

Poirier is highlighted scoring his second-round knockout of Conor McGregor at UFC 257. The ad also cuts in clips of Poirier’s training regime, and his reaction to winning the interim UFC lightweight championship over Max Holloway in 2019. Since his win over McGregor, ‘The Diamond’ has been linked to a title fight as well as a trilogy fight against ‘The Notorious One’.

The greatest moment of Namajunas’ career is also highlighted, as she can be seen landing shots against Joanna Jedrzejczyk and holding the UFC strawweight championship over her shoulder. She won the title at UFC 217 and defended it in a rematch a year later at UFC 223 before dropping the belt in a fight against Jessica Andrade. After coming back to beat Andrade in a rematch, Namajunas is expected to face Zhang Weili for another shot at the belt.

Having multiple fighters featured on such a massive platform has to be considered a big win not just for the UFC, but MMA as a whole. Years ago, it would be hard to even imagine mixed martial artists getting this much exposure on a national scale. While the ad is set to run during a sporting event, the commercials have become as much of a draw as the game itself and are often geared towards mainstream audiences. This just goes to show how far the organization and sport have come in recent years.

What do you think about Dustin Poirier and Rose Namajunas appearing in a Super Bowl ad?