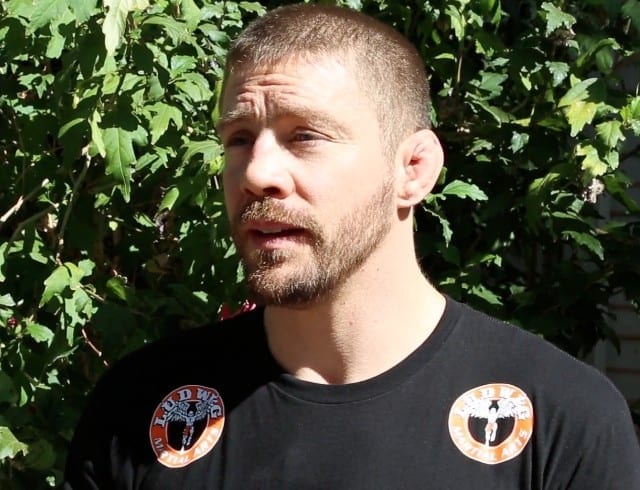 There’s been quite the long, ongoing back-and-forth between Team Alpha Male founder Urijah Faber and his former head coach Duane ‘Bang’ Ludwig, who unceremoniously left the team behind to open his own gym in his native Colorado last year.

Details about the highly publicized drama were sparse, but they did start to rear their ugly heads a bit when Faber got into filming the current season of The Ultimate Fighter (TUF) opposite popular featherweight Connor McGregor.

Afforded some insight into the beef, the ‘Notorious’ not surprisingly tuned into a barb at Faber and his team, calling TAM flagship member and UFC bantamweight champ TJ Dillashaw, who currently splits time training at their Sacramento’s home base and Ludwig’s Colorado training facility, a ‘snake in the grass’ who would eventually betray ‘The California Kid.’

Once Faber saw how that was playing out, he told FOX Sports that while McGregor may not know all of the details he knew enough to rub it in his face on the show. Yet from a certain focus, Faber said he couldn’t fully deny McGregor’s insinuations:

“I had to hear that all season. He doesn’t know how TJ’s and I relationship is, he doesn’t know the back-end story. He does know a little bit of a back story to tear things apart, and I understand what he’s saying from an outsider’s point of view.”

The former World Extreme Cagefighting (WEC) champ and longtime star then moved on to blast Ludwig, noting that he ‘has something to sell’ and that drama inevitably seems to find the coach, who was supposedly broke and desolate when Faber pulled off the street to coach his team:

“”Duane Ludwig is a guy who just keeps finding dysfunction,” Faber said. “I tried to help that guy out so much. It’s just really sad to see dysfunction follow the guy, talking bad about our guys, etc. It doesn’t sit good with me and Conor could sense that a little bit. He was asking me about it and that’s how that whole thing got started.

“You try to help a guy out. Here’s the thing, Duane has something to sell. The guy was dead broke when we got to him and we all tried to rally behind him and give him an opportunity. He did a great job showing some moves, but champions are built because of what’s internal. Not because they know a few good moves.

“The guy got an opportunity to have a second chance to make a living and that’s his livelihood so he’s hanging onto every bit of that. He’s been a bully before, he’s been doing things that are just ridiculous and stuff I don’t even have to get into. It’s like dude, he’s the jealous ex-girlfriend. Conor got a little glimpse of that so he knows how to twist the needle a little bit.”

But then something unexpected happened.

Apparently Ludwig had heard enough, and sought to bury the proverbial hatchet during an appearance on The Deep Waters Podcast (via FOX Sports) today (Fri., September 18, 2015), finally opening up about the circumstances of the drama that resulted in him leaving his former team behind:

“What we talked about on the phone, and what was emailed to me on paper was something different,” Ludwig claims. “And, that happened, three times. That raised a couple red flags for me so I actually never signed the agreement, but I still went out there and acted upon the last agreement that he offered me. The reality is that he was offering me a job, and he fell short of what he offered.

“That’s where we started having disagreements. So, I sat Faber down about three months into the job and was like, ‘this isn’t going the direction that it was supposed to.’ I was being a little short-changed in some areas. I sat down with him and his two partners and after that, nothing changed.”

Ludwig then got into his view that he was leaving California anyway, but the beef simply sped up the process. Despite the messy end, however, ‘Bang’ said he pay a large sum to have the experience with TAM:

“I think I went above and beyond with what I needed to do and he fell short in multiple areas. Ultimately, all that bullsh– aside, I was going to come back to Colorado anyway – Colorado is home – and have my own business. These little bumps in the road just helped speed up that process. But I thank him for the opportunity because I wouldn’t be at this level, I wouldn’t understand martial arts as much as I do now, without that opportunity. So, that’s gold to me. So, for that opportunity right there, I would pay a million dollars for that.”

With that said, Ludwig finally moved to squash the drama, noting that while any athlete who works with him does better, all the shots fired simply weren’t worth it when it was obvious the whole team performed better when he was head coach:

“What ultimately matters is that the team operates on its full potential. And, that happens when we work together. So, anything that disrupts that is just bullsh-, and we should just fu–ing forget about it. I don’t care about the money that is owed to me. Whatever bullsh– he’s said in interviews, I don’t care.

“Everything that you think I did wrong, sorry about that…everything that I feel was done wrong, fu– it. I don’t care anymore. Let’s just squash all that bullsh– and make sure whoever chooses to train with me, has the opportunity because whoever trains with me, they do better, 100 percent, than if they didn’t train with me. And, that’s a fu—ng fact.”