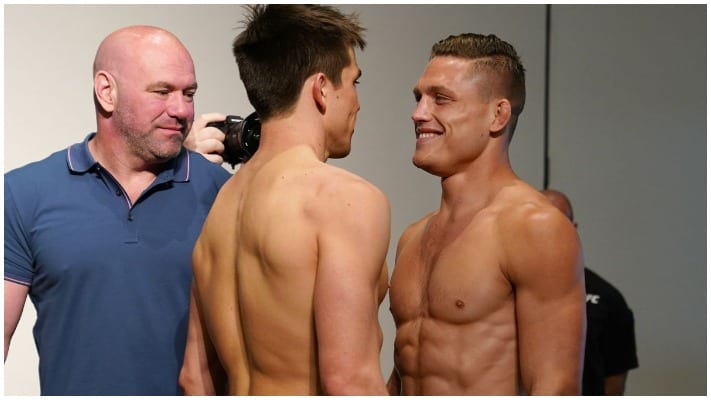 Next up is an intriguing lightweight match-up. Rising star Alexander Hernandez is hoping to make it two-straight since his high-profile loss to Donald ‘Cowboy’ Cerrone at UFC Brooklyn in January 2019. Drew Dober though is in great form heading into this fight. He’s picked up first-round knockout wins in his last two fights and will be confident of making it three in a row tonight.

Round 1: Both fighters come out really fast with lots of footwork in and out. They exchange several shots but a lot of it is missing right now. Alexander Hernandez shoots in for a takedown and gets it. Drew Dober uses the fence to work back to his feet before separating. Dober lands consecutive straight lefts, opening a cut over the eye of Hernandez who returns with a nice jab. Dober sits down for a big punch allowing Hernandez to shoot in on him, Dober defends well though. Dober is starting to put the pressure on Hernandez and it’s working. He lands a nice combination towards the end of the round, followed by another right hand. Hernandez is complaining about an eye poke as the horn sounds to end the first stanza.

Round 2: Before the round begins the doctor comes in to check the eye of Hernandez. He’s given the all-clear and the round begins. Hernandez opens up with a body kick that lands beautifully. Dober takes an eye poke of his own and it brings another break in the action. Dober is landing shots right now and Hernandez is showing off his impressive chin. Dober continues to go head hunting with big power shots. He’s landing eye-catching stuff on occasions but he’s also eating lots of counters too. Dober lands the biggest shot of the fight and momentarily drops Hernandez. He pops back up and gets hit hard again! He looks hurts and desperately shoots for a takedown and gets is potentially keeping him in the fight. Hernandez tries to posture up and loses the position. Dober gets up and goes straight back to work hurting Hernandez again. He again gets the takedown but again Dober pops straight back up. This time Dober doesn’t let Hernandez off the hook. He’s throwing big shots and Hernandez is out on his feet before referee Herb Dean steps in to stop the fight.