LowKickMMA.com
Home UFC News Donald Cerrone: Fighting Someone Like Me Is ‘Super Dangerous’ For Tony Ferguson 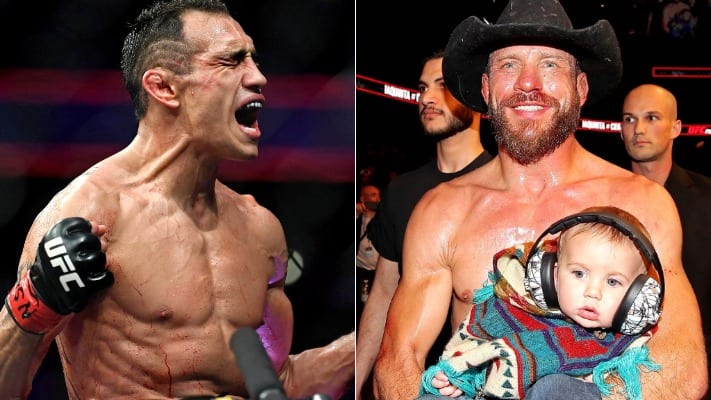 Donald Cerrone and Tony Ferguson have both agreed to take a short-notice fight against one another at UFC 238.

However, the massive fan-favorite match-up between Ferguson and Cerrone is being touted as the people’s main event. Speaking to MMA Junkie recently, Cerrone discussed taking the fight with “El Cucuy” on such short notice. Of course, “Cowboy” has no issue ever taking short-notice fights, but can’t say the same about Ferguson.

The ex-interim lightweight champ is on an 11-fight win streak at the moment, and believes he deserves a title shot. Cerrone said it took Ferguson a while to sign the bout agreement, and he thinks he knows why:

“I don’t think he wanted to have to fight again other than a title fight,” Cerrone said. “I think he believes he deserves a shot, so for him fighting someone like me is super dangerous.

Why would he want to put himself at risk of (losing) a title shot? Especially fighting a (expletive) killer. But I don’t give a (expletive). That’s the difference between me. I’ll fight anybody. So I’ve got to beat them all anyway.”

Cerrone has had a first-hand look at what Ferguson is capable of inside the Octagon. His good friend and training partner Lando Vannata faced Ferguson back in July of 2016, nearly knocking Ferguson out after stunning him badly. However, Vanata fell victim to Ferguson’s elite jiu-jitsu game in the second round, being submitted via the former interim champ’s patented D’Arce choke.

From what “Cowboy” saw, Ferguson is simply a high-volume striker, and not at the elite level. Cerrone believes he’ll be just fine against him inside the Octagon:

“I watched him fight Lando (Vannata) my buddy,” Cerrone said. “I know what kind of opponent I’m against. He’s tough as (expletive), he’s very unorthodox, but not a very high-level striker, I don’t think. He’s just high volume. We’ll be all right.”