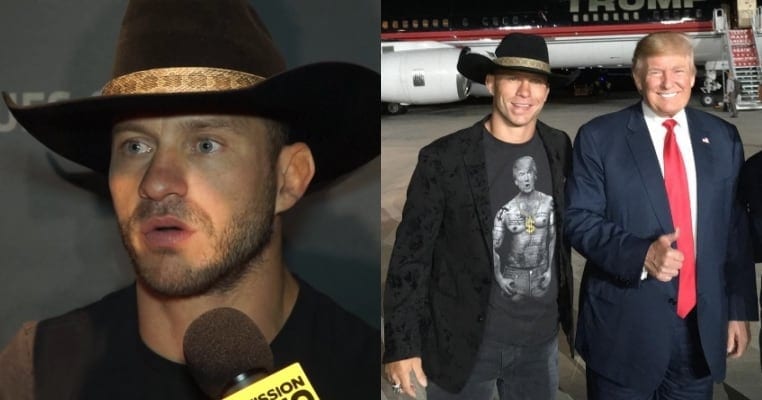 Returning at this weekend’s UFC 205, Donald Cerrone is looking to make another big statement at welterweight. Having fought the majority of his career as a lightweight, the 15-pound increase seems to have improved ‘Cowboy’s’ already high calibre form. Finishes over Alex Oliveira, Patrick Côté and Rick Story have Cerrone in good standing, holding top 10 rankings at both 155 and 170 pounds. Standing in his way at UFC 205 is Ultimate Fighter 17 winner and surging welterweight contender Kelvin Gastelum.

‘Mini Cain’ defeated Johny Hendricks at UFC 200 last time out, and will hope to make a statement about his future title contention with a victory over Cerrone. What we saw from ‘Cowboy’ in his last fight was perhaps his greatest form to date. Dispatching Rick Story with a fluid and beautiful Muay Thai combo, Cerrone showed that welterweight is possibly the best division for him.

Known for his ‘anywhere, anytime’ attitude for taking fights, Donald Cerrone tells our friends Submission Radio that even a move to middleweight isn’t out of the question. Reacting to Donald Trump’s recent move to the White House, and also the talk of a fighters union, ‘Cowboy’ had some very interesting things to say ahead of UFC 205:

“I don’t give a f*ck, I’ll fight lightweight, welterweight or middleweight. I f*cking love fighting. I’m pro trump, I’m pro union too. Other fighters have been asking me how I can be pro Trump and pro union, like it’s a double negative. I’m like ‘Hey man, I can’t support what I want to support?’ I don’t even know anything about a fighters union, I need to sit down and discuss this. I need to find out what these guys stand for.”

“I’m coming up on 10 years in the UFC, and I have no pension or healthcare. Everyone’s really like ‘Hey great idea, but you do it and we’ll stand behind you.’ I’m happy to stand and be the face of the union. They are worried that they are going to get cut, am I worried? Yes and no, but hopefully I made enough of a name and people want to see me fight. There’s been no backlash, it’s f*cking America man, I can say whatever I want.”