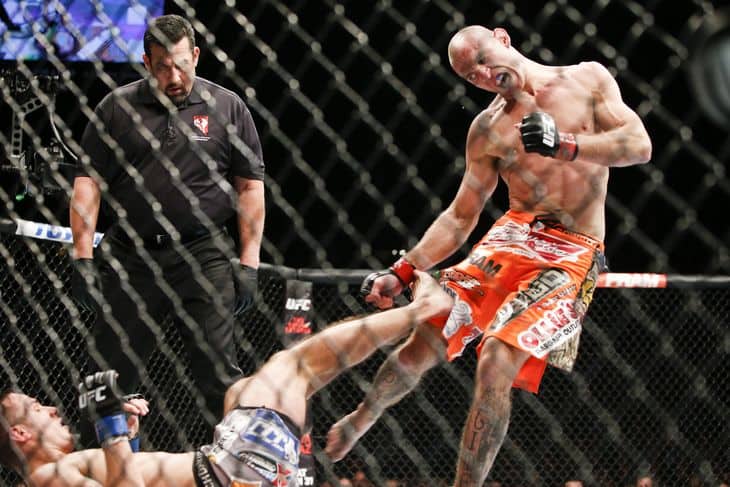 Former lightweight title challenger Donald “Cowboy” Cerrone was entering the last fight on his current contract at UFC 202 last night (August 20, 2016) where he took on Rick Story in a welterweight bout. Cerrone was able to leave the Octagon successful after smashing Story with a brutal combination in the second round, although he admitted in the aftermath of the bout that he had a rough day prior to fight night:

“I just woke up – worst headache I’ve ever had man,” Cerrone told MMAJunkie after the fight. “All day I was just laying in bed, tired, my shoulders were sore. Everything that could go wrong went wrong. I forgot the key to my Harley. It was a (expletive)-up day. I was trying to get out of first gear and couldn’t do it. That’s what you train for, though, to beat someone on your worst day.”

In recent times, we have seen many fighters test the waters of free agency after fighting out their contracts, but Cerrone is a unique character, and he typically goes about things in his own way. With that being said, “Cowboy” confirmed that he isn’t leaving the world’s largest mixed martial arts promotion:

“I let my management team handle that because all I do is fight,” Cerrone said. “I’m a UFC guy, man. I’m not going anyway. They’re going to work out that, and I’m looking to get 50 fights in this mother(expletive). How about that? … I need to get it done, I want to get it done right away, so we’ll see.

“I just talked with (new UFC owner Ari Emanuel), and they seem very happy with me. I see big things in this company. I feel like I’m a veteran of the sport, and I love it. I love fighting for the UFC. This is my drug. I need it as much as I possible can. I feel like a crackhead up here already looking for another fight. It’s good.”

Not only does he plan to stay with the UFC, but he knows exactly what he would like next. Despite usually being unconcerned with the title, Cerrone said that he’d like to drop back down to 155-pounds after winning three straight at welterweight for a rematch with current lightweight boss Eddie Alvarez at Madison Square Garden:

“Normally I’d just say I’ll take anyone, anywhere – I don’t care who I fight,” Cerrone said. “Then they always tell us, ‘If you want a fight, let up hear about it.’ So god-damn it, here we go. I’m letting someone hear about it. It was my 32nd walk at Zuffa. It’s time. Let’s start making some calls and making some moves.”

Cerrone scored a dominant decision victory over Alvarez at Alvarez’s UFC debut back at UFC 178, and he remains ranked inside the top 10 at 155-pounds. UFC President Dana White, however, said that he would prefer Cerrone to stay at 170-pounds, so it should be interesting to see how the situation plays out.