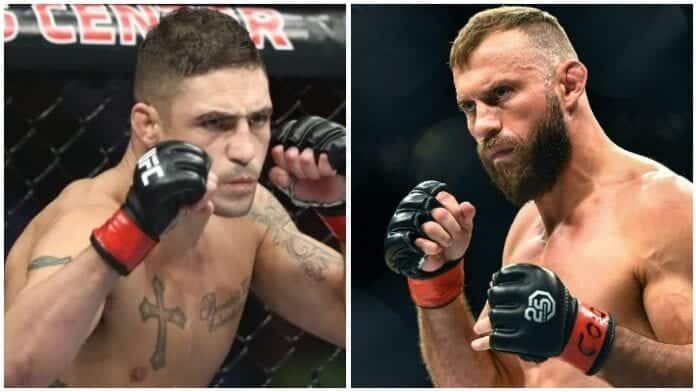 The pair of former teammates were set to collide in the UFC Vegas 26 headliner this Saturday only for Sanchez to get released by the promotion following the recent saga involving him, his head coach Joshua Fabia and the UFC.

It also changed Cerrone’s plans in the process as he was opponentless for a few days until it was announced that Alex Morono would step in to fight him in a short-notice three-round fight.

While there was animosity between Cerrone and Sanchez already, the former can’t be too mad at the latter given the influence of the controversial and outspoken Fabia.

“It’s hard to be mad at (Sanchez) now because I don’t think it’s him guiding the horse,” Cerrone told reporters Wednesday (via MMA Junkie). “I think he’s just running blind, and this other jamoke, his new lover, is showing him down the path. I don’t know.

“Can’t really be mad at the kid, or the old man, I should say. But really it’s his cult leader and lover that took over his life, and I feel bad for you, Diego.”

Cerrone has been in the game for a long time.

But even he hasn’t seen what happened to Sanchez as far as getting cut just days before a fight due to something they or their coach said.

And while Cerrone was looking forward to fighting Sanchez, he didn’t want to dwell too much on the latter’s situation.

“I’ve never seen someone get thrown off because they’re crazy,” Cerrone said. “It’s a first for me. But short notice is short notice. I made a career out of (it). Usually I’m the guy filling in, not the other way around, so pretty cool Alex threw his hat in and they picked him.

“You’ve seen people get chopped, so apparently he pissed the wrong people off. It just so happened right before the fight. But I don’t really have anything to say. I was looking forward to fighting (Sanchez).”