LowKickMMA.com
Home UFC News Donald Cerrone On Anthony Pettis: The Son Of A B—- Beat Me 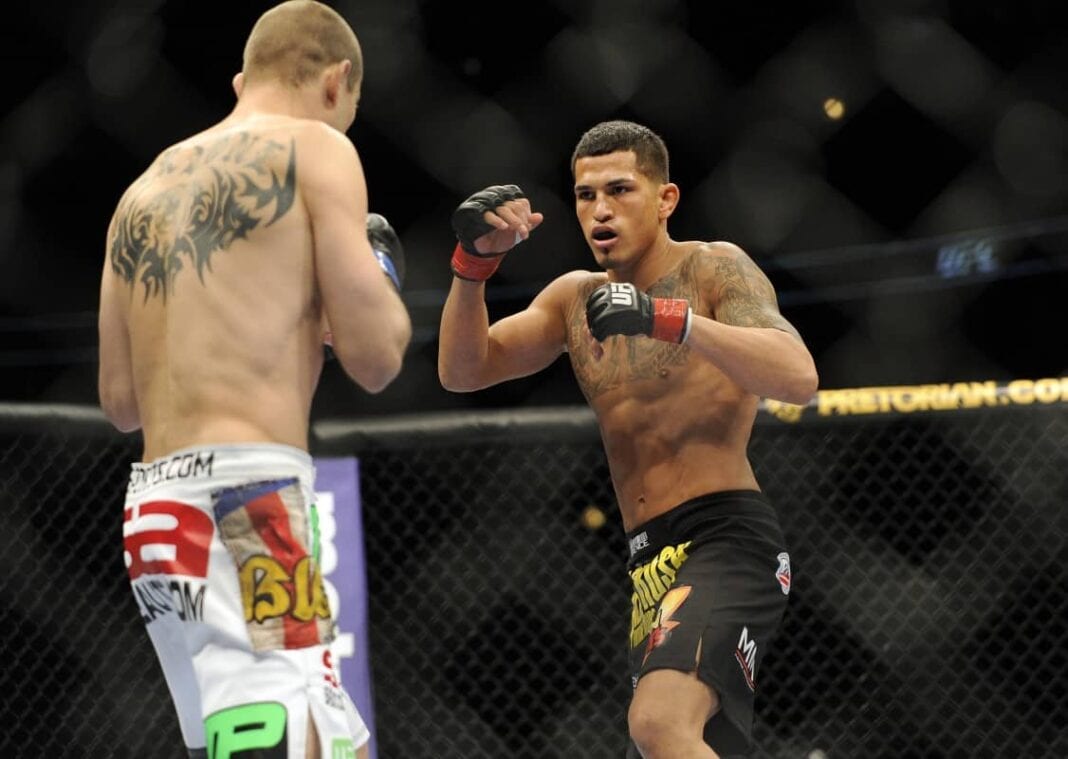 Despite fighting only three times in 2013 and 2014, UFC lightweight titleholder Anthony “Showtime” Pettis has made his wins count.

They’ve all been over absolutely elite competitors, including currently surging Donald “Cowboy” Cerrone, whom Pettis put away with an absolutely devastating first round body kick at UFC on FOX 6 in January 2013.

Prior to his convincing submission win over Gilbert Melendez at UFC 181, Pettis was feeling a bit slighted in terms of respect during his time away from the cage. He noted that many had been building up Cerrone, who has won five straight fights, but failed to acknowledge that he had already destroyed “Cowboy”:

“Look at (Donald) Cerrone — Cerrone’s supposed to be one of the best kickboxers in the division, and I ended that fight in three minutes. A couple body kicks and that was it. I was just warming up.”

Cerrone apparently caught wind of Pettis’ words, yet he’s taking a path rarely seen from professional fighters in his response. “Cowboy” admitted to FOX Sports that he simply got beat by Pettis, and there’s not much else to say:

“I didn’t even know he was saying those things so that goes to show how much I give a s–t about him. It’s true, whatever. There’s nothing I can say to that mother—–r. He did beat me in under three minutes. He kicked me and I dropped. I can’t beat around the bush and say ‘oh well he did this or he did that’.  The son of a b—h beat me. I can’t even rebut him.”

Quite an interesting point of view from Cerrone, who will face off with undefeated prospect Myles Jury in the pivotal co-main event of January 3’s UFC 182. All Cerrone can do is keep winning if he wants to get a chance to avenge his loss to “Showtime,” and he said that’s what he’s going to do:

“We’re going to fight again. Absolutely. I’ll be godd—ed if things don’t go differently. He wants to say ‘I beat Cowboy in under three minutes’, whatever dude. I’ve got no rebuttal other than to say I’m going to keep fighting and I’ll see you again.”

There’s not much doubt that Cerrone, who may be the most active fighter in MMA, will keep fighting. Whether he works his way back up to another shot at Pettis remains to be seen, but he knows that he’ll be tasked with a well-rounded challenge in Jury:

“I think he’s the new breed, the new generation — guys that are good at everything. Good at wrestling, good at jiu-jitsu, good stand-up, he’s definitely trying to make a name.”

However, Cerrone still doesn’t believe that those skillsets will be able to defeat his experience at UFC 182 as he set forth a forceful gameplan to defeat “Fury”:

Fighting at the peak of his career, “Cowboy” seems to be in a feisty mood. It could be argued that the under-the-radar Jury has more of a chance at beating him than any of his recent opposition, however.

Will Cerrone keep his streak alive and earn another shot at “Showtime?”