LowKickMMA.com
Home UFC News Dominick Cruz: Conor McGregor Is A Failure Of His Own Success 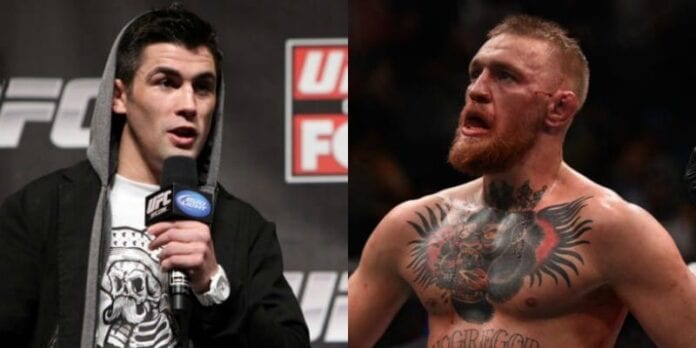 Reigning UFC bantamweight champion Dominick Cruz has a huge week ahead, as he’ll once again put his 135-pound strap on the line in a long-awaited trilogy bout with Urijah Faber in the co-main event of June 4’s UFC 199 from The Forum in Inglewood, California.

Cruz, however, took some time out of his busy scheduled to discuss another one of the sport’s biggest names in featherweight boss Conor McGregor, a man who appears to make headlines every single day.

The Irishman was set to rematch Nate Diaz, who handed him his first UFC loss last March, in the main event of July 9’s UFC 200, but the bout was scrapped after McGregor refused to fully comply to the intense promotional demands required of him.

While not taking the side of the UFC nor the side of McGregor, Cruz admitted that he understands where the “Notorious” one is coming from:

“You can’t really side with anybody,” Cruz said recently on The MMA Hour. “I put myself in Conor’s shoes, I’ve lost a fight before. And when you lose a fight, it kind of puts you back to the drawing board. You hear that all the time, ‘I’m going to go back to the drawing board, I’m going to do this, I’m going to do that.’ When you lose a fight, you’ve got to change something. He realizes he’s human now after that loss. He realizes he can lose. He hit Nate (Diaz) with everything and the kitchen sink in that first round and Nate did not back up for one second. That’s a different type of fight.”

“We have never seen anybody stand up to Conor McGregor’s antics in the pre-fight,” Cruz said. “Every single person he’s faced prior to Nate Diaz was broken mentally, I mean shattered mentally, before they even stepped in the cage. You can’t break Nate. He does not care. He fights for a different purpose and he’s a real OG, for lack of a better term. The guy doesn’t care. Nate, you’re not going to break him, you’re not going to get him out of the fight. You know when you’re fighting him, you’re going to be in it from the beginning until the end. You have to push the button on him, and then you realize he’s got a heck of a chin too.

“So, I get where Conor is at. He wants to put his head down, train, focus, be the best Conor he can be because of that last loss. It can shake you when you loss like that, and his mind is focused on being the best him he can be. So I understand that.”

It’s no question that McGregor is the sport’s biggest star, and simply put, he’s mastered the art of media and self-promotion. The “Notorious” one is a media machine, and it’s obvious that he wants to put all of that aside and focus on his training and tasting defeat.

Cruz essentially feels as if McGregor being so talented within the media has actually been his downfall:

“When you look at what the UFC wants, they want you to do the media,” Cruz said. “Conor is a failure of his own success. He’s so good at this media that they’re going to ask him to do a ton. But I’ll be honest, if the UFC said, ‘hey Dominick, we’re going to pay you 100 times what you’re getting paid now and you’re going to make Conor McGregor money,’ I’ll go live with Ariel Helwani for my entire camp, eat everything you eat, do every radio interview you do, go out there and be ready to fight.