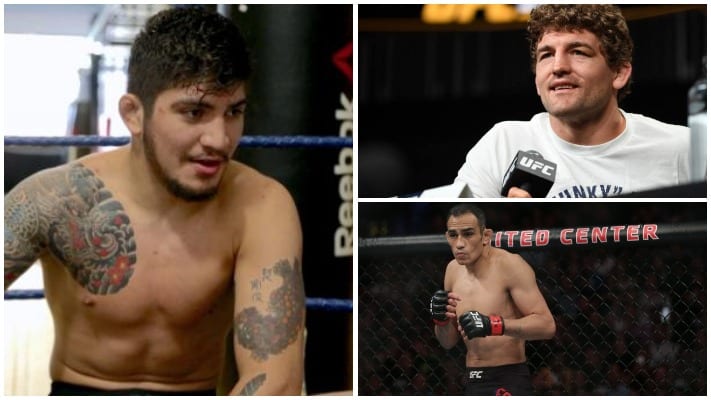 Dillon Danis revealed there is some movement in a potential grappling match with current UFC welterweight Ben Askren.

The two have had their history of beefing each other on social media. Danis would later challenge Askren to a grappling match. Although “Funky” was not as receptive to it, he would later have a change of heart. However, he also stated that it would be after his mixed martial arts career.

But Danis claims Askren called for a grappling match much before:

“That’s real. Even before he came on your show, Flo Grappling came to my gym,” Danis said on Ariel Helwani’s MMA Show on Monday. “”They said that Ben Askren called Flo Grappling personally on the phone and said ‘I want to grapple Dillon Danis, let’s set it up.’ I said okay, let’s do it. I don’t care, I’m down.

“They were working on setting up some press conferences and building up a big event around it. I think that’d be awesome but the only thing that sucks is he’s going to get submitted by Demian Maia [at UFC Singapore this weekend] but let’s see what happens.”

Danis Could Have Grappled Tony Ferguson

The topic then turned to Joe Lauzon’s winning return at UFC Boston. Danis revealed that he actually grappled and defeated Lauzon back in the day while revealing something else — that he was initially supposed to grapple Tony Ferguson instead of Lauzon.

“Joe Lauzon’s a legend, even back then. I was like ‘Tony Ferguson? That guy fights on the prelims. He’s a purple belt.’ It’s funny how things come around. …Many years down the line, I’m still making all the calls.”

What do you make of Danis’ revelations?