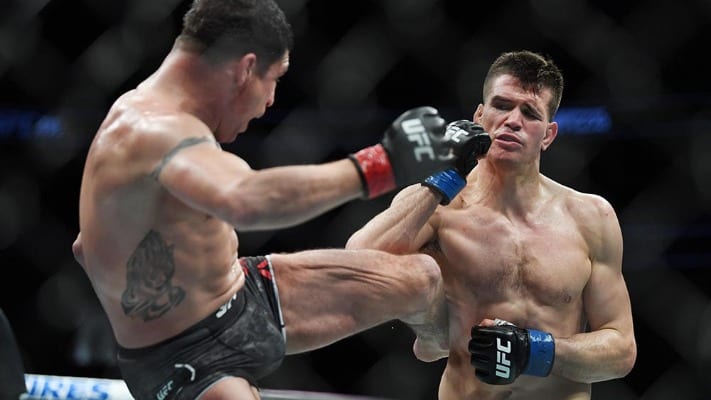 Diego Sanchez’s fight with Mickey Gall is well behind him, but that doesn’t mean Sanchez will stop taking shots at the young welterweight.

Sanchez reflected on his latest fight under the UFC banner inside of the Octagon while doing a recent interview with MMA Junkie. The fight was against Mickey Gall where Sanchez picked up a brutal win. In the interview, Sanchez described his win in awkward style, claiming he took Gall’s virginity:

“I got hit one time in the fight,” Sanchez began (H/T to BJ Penn). “I dominated. Poor Mickey Gall. I haven’t heard from him, where he is, what he’s doing, [about] his next fight… I haven’t heard nothing from him. That’s because I went inside him and I took his virginity — in a Dirty Sanchez kind of way.

“I gave him about five good knees to the anus and affected the hemorrhoidal system. That might have been why he had kidney failure in the fight, because all of the blood was down there in the lower region of his body. Them kidneys were just [slurping noise] sucking for that blood.

“Then I got him in the liver, a little blood would go to the liver, you know? Then I hit him right in the solar plexus chakra, bam! Shut down his universe, shut down his universe. I’ll be surprised if we see him back ever again in the same fashion when he was on the rise, because I took that rise boom. Now I’ve got the rise.”

The two welterweights met at the UFC 235 pay-per-view (PPV) event from the T-Mobile Arena in Las Vegas, Nevada. In the second round, after mounting Gall and pouring on a beating, Sanchez picked up the TKO win.

Sanchez has his next fight lined up as he’ll take on Michale Chiesa in a welterweight bout at the upcoming UFC 239 PPV event. His fight with Chiesa will serve as the opening bout on the main card of the event that takes place on Saturday, July 6, 2019, at the T-Mobile Arena in Las Vegas, Nevada.

What are your thoughts on Sanchez’s strange comments about Gall?