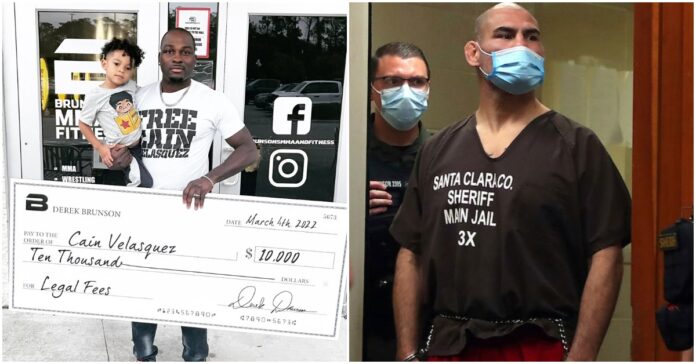 UFC middleweight contender Derek Brunson has raised $10,000 for Cain Velasquez who is currently facing more than 20 years in prison after being charged with attempted murder and nine other offences following an incident in San Jose.

The former UFC heavyweight champion allegedly fired a handgun into a truck occupied by Harry Goularte Jr along with two other people one of those being Goularte’s stepfather.

The 39-year-old has received a lot of support from the MMA community. Brunson has gone one step further than most as he’s raised a substantial amount of money that’ll go towards Velasquez’s legal fees.

“As a father I feel you Cain,” Brunson wrote on social media. “The MMA community got your back! 10k in 2 1/2 days sent to his wife ! @cainmma 💯#FreeCainVelasquez”

Do you think the money Derek Brunson has raised will help free Cain Velasquez from prison?