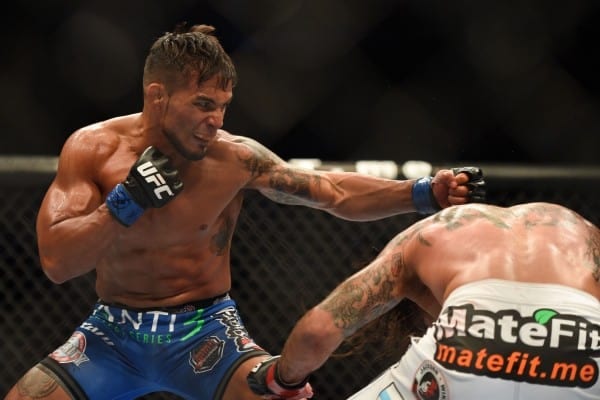 Bermudez landed a stiff leg kick, but Kawajiri answered with a spinning back fist. A hook found the mark for “The Menace” and he got a hold of “Crusher’s” back. Kawajiri looked to work his way into a dominant position as Bermudez held onto his arm. “Crusher” got Bermudez in a cradle and landed a knee to the body. “The Menace” got back up, but his opponent stuck to him to dumped him back down. The round ended with “Crusher” pressing Bermudez against the fence.

“The Menace” closed the distance and held onto a choke very briefly. Bermudez connected with a right hand in a dominant position. The two battle for control against the fence before “Crusher” broke free. Kawajiri’s failed takedown attempt led to a series of punches landed for “The Menace.” He connected with elbows as his opponent continued to attempt a takedown. The round ended with Bermudez having Kawajiri’s back.

Bermudez pressured Kawajiri immediately and took him down. Like in round two, Kawajiri continued to try taking his opponent down and delivering little offense. “The Menace” landed an uppercut, but slipped from a high kick attempt. Kawajiri went for a choke, but Bermudez easily slipped out. A tired Kawjiri threw out a spinning attack. A leg kick was followed up by a right hook from Bermudez. The final horn sounded as “The Menace” landed some punches in top control.

Bermudez was awarded a unanimous decision win. After the fight, “The Menace” said he would like a rematch with Ricardo Lamas and a bout with BJ Penn. Bermudez lost to Lamas back in Nov. 2014 via guillotine choke in the first round.