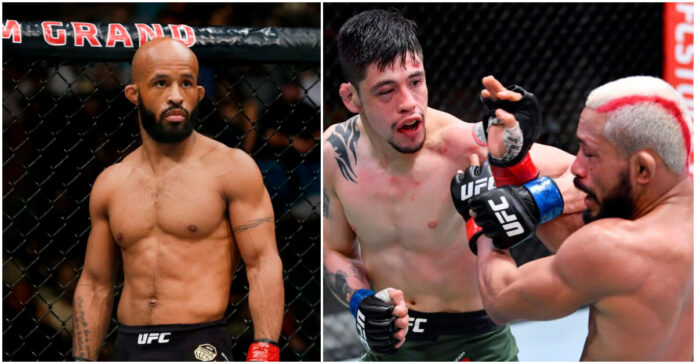 After a thrilling third fight that saw Deiveson Figueiredo dethrone Brandon Moreno via unanimous decision, UFC decided to target an unprecedented fourth fight between the pair. According to Ariel Helwani, the promotion is hoping for a showdown in July, with a possibility of taking the co-main event slot at UFC 276 during international fight week on July 21.

In his Monday appearance on The MMA Hour, the inaugural UFC flyweight champion Demetrious Johnson questioned the fourth fight.

“Why do a fourth fight? Why? Fight Pantoja. Let Pantoja fight. Let Kai Kara-France fight. Fight somebody totally different. Go out there, get your mojo back if you feel like you need it. Get a fresh look in front of you.”

“Everybody’s always trying to chase this title. Don’t chase the title, the title will come if you’re worthy of it, if your path leads you to that. Don’t just try to run down a road and run in the same f—ng roadblock.”

“Fight somebody else, then maybe, you’ll find something else in the other fighters you go against. And then when you approach that roadblock again, you’re like, ‘Ah, I know how to do this time. It’s not the same thing I’ve been looking at for the past two to three years.’ Do something different.” (Transcribed by Bloody Elbow).

Having reigned over the division for years with dominance, Demetrious Johnson understands the money that goes into booking a fourth fight but does not consider it to be worth the potentially lost opportunities.

“Yes, it makes a lot of money sense for the UFC, and maybe for the athletes, too,” Johnson said. “I know how the UFC contracts are structured, so whether Brandon Moreno fights Figueiredo or Kai Kara-France, I’m sure he’s probably gonna get the same pay.

“You’re better off fighting Kai Kara-France or Pantoja,” he continued. “And then if you get that, boom. You get your show and your win, so you probably make $250K. Then, you might be in the escalator, so you fight another one.

“At the end, you’ll be like, ‘Hey, I got two fights in my contract. You know what? I don’t want to re-sign. I want to fight this one. I believe in myself.’ You go out there and fight, and let’s say you win the belt, next thing you know you’re in a great position.”

While another fight makes sense for the UFC, it may not be what the two fighters want either as they seem to side with Demetrious Johnson on this. Figueiredo called for Dana White to skip his next bout with Moreno due to alleged ‘racist comments’. Another contender who gained a lot of momentum following his recent win over Askar Askarov is Kai Kara-France.

The Brazilian took to Twitter to express his interest in fighting Kara-France after his call for a title shot as he labeled him a “dirty kiwi”.

Do you agree with Demetrious Johnson’s strategic approach or do you want to see that fourth fight happen?