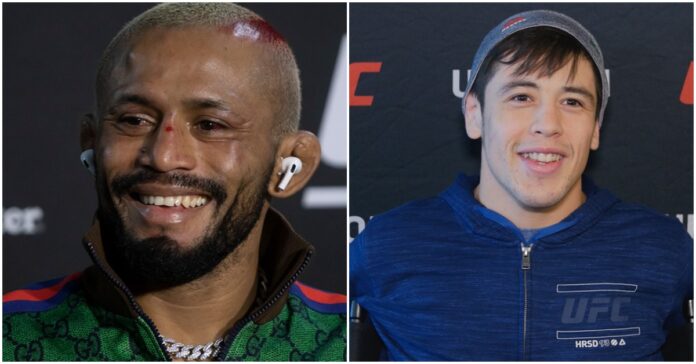 After reclaiming his UFC flyweight title Deiveson Figueiredo wasted no time saying the former champion was a “crybaby”.

In a close decision fight that could have gone to either of the fighters, Brandon Moreno claims he won.

Figueiredo was shocked by that and thought he might’ve done enough to win every round in the UFC 270 co-main event.

“It was 4-1,” Figueiredo said at the post-fight press conference. “I mean, there were five knockdowns. It was funny that it was 4-1 – they could have just [given] me every round.”

Two of the judges scored it 3-2 in favor of Figueiredo, while the final judge gave it a wider scorecard of 49-46.

The Brazilian champion claims a right hand that dropped “The Assassin Baby” at the end of the third round was a missed opportunity to finish the bout.

“If it was 30 seconds more, I feel I would have gotten him,” Figueiredo said. “I think he lost his senses a little bit. He looked like he was not feeling too well there and was kind of saved by the buzzer. I feel his soul left his body, and I feel with 30 seconds I would have killed it.”

Figueiredo credited his victory to his new team, which included flyweight and bantamweight great Henry Cejudo.

“I used to come into the octagon so full of energy trying to finish people off in the first minutes, and it was very important to keep calm and become even more dangerous,” Figueiredo said. (Transcribed by MMA Fighting)

What’s next for Deiveson Figueiredo?

In Figueiredo’s post-fight speech he said he would be open to a fourth fight with Moreno, but quickly backtracked.

“Brandon didn’t give me the chance to fight him again,” the UFC flyweight champ said. “He didn’t want to, except [Alexandre] Pantoja got hurt. That’s why the UFC gave him the fight. If he behaves well for the next couple months, we’ll figure this out.”

Figueiredo expressed an interest in defending against Kai Kara-France next, he said.

“I want to knock him out, and he knocked out Cody Garbrandt, so that’s the guy I wanted to knock out. It’s not in my interest to fight Cody any more, so it’s Kai Kara-France.”

Who do you want to see fight for the flyweight title next?