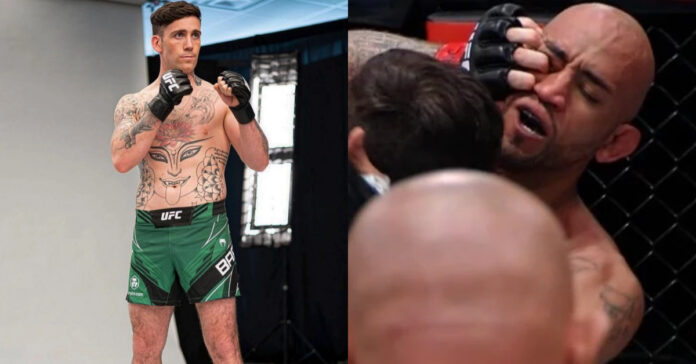 Dean Barry has penned a new deal with Karate Combat.

Coming off the second loss of his professional career, former UFC fighter Dean Barry will be taking his combat sports chops to the karate promotion, hosting events since April 2018. Barry only has one outing under the UFC banner which came against Mike Jackson at UFC Fight Night 205 in April.

He ended up getting disqualified on his debut due to eye-gouging in the first round, effectively ruling him out of competition in the promotion.

Following the controversial loss, Barry defended himself as he declined any intention of making contact with his opponent’s eyes and claimed it to only be an accident. He later issued a statement on his now-deleted Twitter account, speculating whether Jackson was actually badly hurt in the fight and suggested he took the easy way out.

“He didn’t want to continue fighting,” Barry said at the time (ht Irish Mirror). “Straight after the ref called the fight off he was fine. Both eyes opened perfectly even though he said he can’t open his eyes.”

Jackson fired back at Barry for his inflammatory comments.

“That’s why he had to delete his Twitter, for being a dumb***. That all falls on him. He literally did all this to himself and he tries to blame me for quitting.”

While Barry’s brief stint in the UFC didn’t net him the results he was hoping for, Karate Combat president Adam Kovacs is excited to have the rising Irish prospect in his organization and even backed him to be a future champion.

“Dean Barry is a fighter we’ve had on the radar for a long time and he was also recommended to us by Georges St-Pierre himself, as GSP brought him in as a sparring partner when he was preparing to fight Michael Bisping for the UFC middleweight championship.”

“Dean is an outstanding karate fighter and we were delighted to see him reach the UFC himself.”

“He was unlucky with what happened there and you could say maybe even unfairly treated, but had been following Karate Combat the whole time and when he saw his friend Ross Levine winning the middleweight world title at our last event, he decided he wanted one of those belts for himself and reached out to us.”

“We got the deal done and I’m excited to see him debut at Karate Combat 35 on August 27 in Orlando, Florida. We already have one Irish champion. If Dean Barry goes on to win a belt then I guess it’s going to be true what they say: the Irish don’t come to take part, they come to take over!” (H/T Irish Mirror).