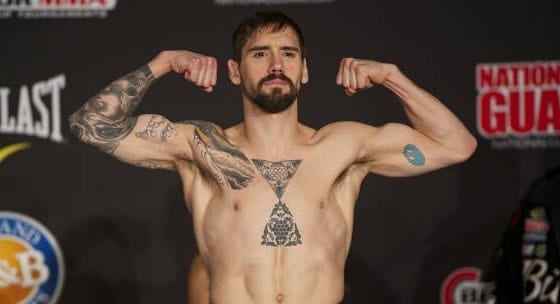 Two days before his long overdue lightweight title shot against Will Brooks in the main event of Friday’s (April 10, 2015) Bellator 136 from the Bren Events Center in Irvine, California, Dave Jansen isn’t all that worried about the trash talk that his opponent has been stirring up.

After winning the Season Seven lightweight tourney over Marcin Held way back in March 2013, Jansen was forced to withdraw from his scheduled title shot against then champ Michael Chandler at Bellator 96 with an injury He was then out of action for over 19 months until he returned to beat Rick Hawn via decision at last October’s Bellator 130.

He’s obviously been through a lot recently, so Brooks’ jabs, which have included his saying Jansen is not “a guy people are extremely impressed by,” are seemingly rolling off his shoulders. Speaking in a recent appearance on MMA Junkie Radio, Jansen called Brooks a “walking cliché’” with no substance:

“Will Brooks is just a walking cliché. I haven’t heard one original thing out of that guy’s mouth. All kids are born geniuses and really creative, and we’re all told to conform. He’s the biggest conformist I’ve ever fought.”

It sounds like Jansen isn’t playing around with his rebuttal heading into the fight, a bout where he doesn’t seem all that worried about his opponent’s skills, either. Even though Brooks has won six straight bouts in Bellator since July 2013, Jansen doesn’t foresee any difficulty with dispatching the champion’s skillsets:

“I don’t know what he’s really going to present that’s going to be a danger to me. I’m going to have an extra two rounds to put the nail in the coffin. That’s something I’ve been looking forward to my entire fight career. He doesn’t have the intestinal fortitude to survive the gut check that I’m going to present him with.

With the mindset of a relentless killer, Jansen appears to have a laser like focus before the he squares off wit what should be the toughest challenge of his career in the 16-1 Brooks. He doesn’t seem to mind, however.

Will that confidence lead to a title-sealing victory at Bellator 136?