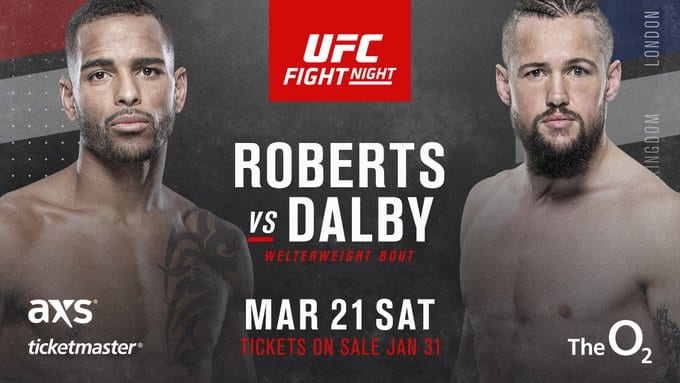 The UFC continue to build excitement for their return to London next year. Native Londoner Danny ‘Hot Chocolate’ Roberts and Danish fighter Nicolas Dalby have been scheduled to meet on the card which takes place in London, England on March 16.

This is a long-imagined match-up for British MMA fans due to both fighters exploits outside of the UFC. Roberts and Dalby both built their reputations fighting for Cage Warriors. In impressive runs they rose to the top and captured the Cage Warriors belt at 170lbs. They’ll now meet in the big leagues at UFC London.

‘Hot Chocolate’ got back to winning ways last time out against Islam Imadaev at UFC Russia. The 32-year-old scored an epic knockout to save his career in the promotion. Before then 2019 had not been kind to Roberts. He unfortunately became part of Michel Pereira’s highlight reel when they fought back in May. Before that he lost in controversial circumstances during the UFC’s last trip to London. Claudio Silva got the submission win, but it was clear for everyone to see that Roberts didn’t actually tap. He enters the fight with Dalby with an overall record of 17-5 and whilst he is 6-4 inside the UFC octagon.

Dalby’s first stint in the UFC didn’t exactly go to plan. After going 1-1-2 in four fights he was cut. Despite the fact he was never stopped and earned a credible draw with rising star Darren Till. Since then he has battled depression and alcoholism but has still managed to return to the top. Another Cage Warriors stint saw him regain his mojo and pick up an interim belt before he again got the call up. In front of a native crowd he picked up a unanimous decision win over the always tough Alex ‘Cowboy’ Olivera.

READ MORE:  Reinier De Ridder Believes He Could Beat Israel Adesanya And Believes His Style Matches Up Well Against Him

The fight will go down on the undercard of UFC London, on March 16 at the O2 Arena. As of yet no main event has been announced, although Darren Till is rumored to meet Jack Hermansson in a clash of middleweight contenders .

Who wins when Danny Roberts and Nicolas Dalby square off at UFC London?