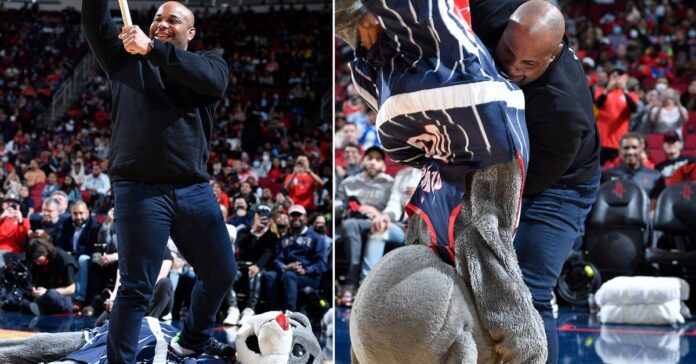 Set to return to the booth at the Toyota Center in Houston, Texas tonight for UFC 271, Cormier is joined by lead play-by-play commentator, Jon Anik, as well as Michael Bisping in the color commentary role, with the latter replacing Joe Rogan who was removed from initial broadcast duties last night due to a scheduling conflict, according to the organization.

Taunted by Clutch the Bear at courtside, Daniel Cormier shot a takedown on the mascot, slamming him to the floor, before holding up a ‘make noise’ banner for the home audience who offered him a massive reception as a result – despite the Rockets’ defeat to the Toronto Raptors, who have now managed to emerge victorious in each of their last eight.

Set to return to the commentary booth tonight, Cormier – along with Anik and Bisping will oversee a 14 fight card for UFC 271, rounded out by a middleweight championship rematch between current division leader, Israel Adesanya and former titleholder, Robert Whittaker.

In the night’s co-headliner, Derrick Lewis will look to impress hometown fans following last night’s defeat for the Rockets, as he matches with Syndey favorite, Tai Tuivasa in a heavyweight pairing which almost guarantees fireworks from both sides.