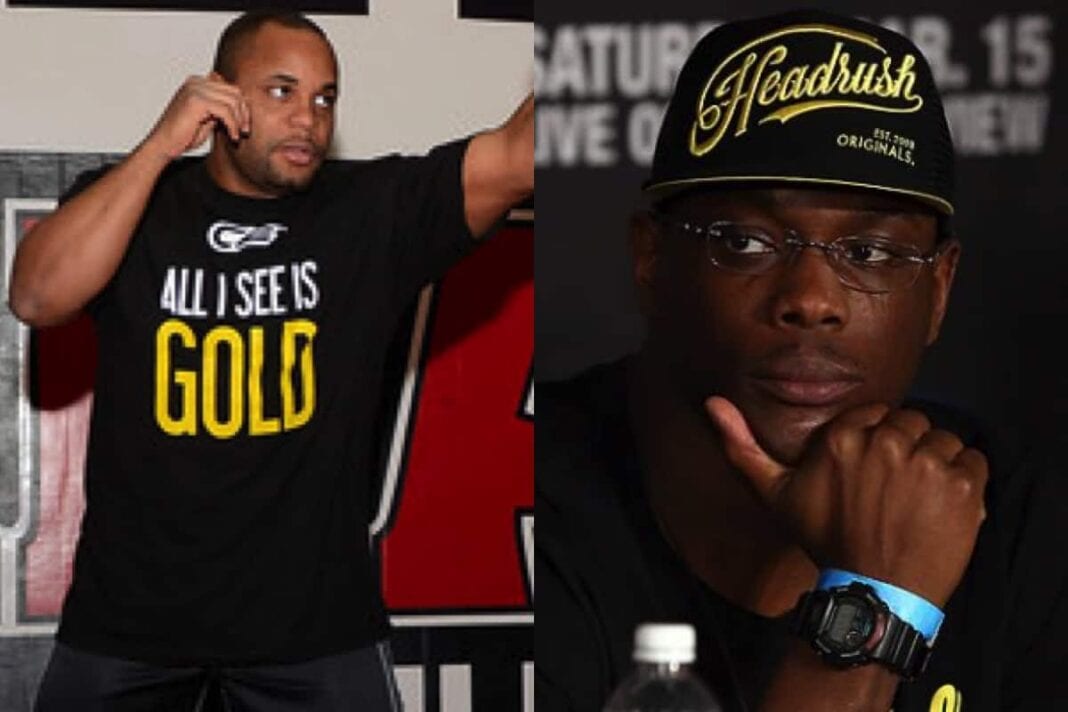 With less than three weeks left until fight time, April 23’s UFC 197 pay-per-view from Las Vegas was dealt a severe blow when it was recently revealed that Daniel Cormier was forced out of his awaited championship unification rematch with former champion Jon Jones due to a foot injury.

With precious few top level contenders available to fight the dominant ‘Bones,’ who has been out of action dealing with legal troubles since a telling decision win over Cormier in the main event of January 2015’s UFC 182, No. 6-ranked Ovince St. Preux was the only man willing to fill on short notice.

Nearly everyone has tabbed Jones to run through ‘OSP’ with ease, and the oddsmakers agreed by setting ‘Bones’ up as the understandable massive favorite. St. Preux has won seven of his nine total UFC bouts but has obviously never faced an opponent the caliber of all-time great Jones, so during an appearance on today’s edition of The MMA Hour, Cormier extended a very interesting offer to the Tennessee-based combatant to potentially help him win:

“I think that everybody has a shot, but you know, I think there’s a chance for Ovince to have a better shot, and it’s up to him to take it. You know, and that’s by coming here. You know, we’ll open our doors to him to come and train at the American Kickboxing Academy. I don’t care what happens in the future; I can’t train with him, but I’ve got a guy named Cain Velasquez that can train with him, I’ve got a guy named Luke Rockhold that can train with him, I’ve got a guy named Chi Lewis-Perry, got a guy named Frank Munoz; we have everything in place where he can just take my training camp for the next few weeks. Take my training camp, we will take care of it. We’ll fly Ovince and his team out here, we’ll put ‘em up, give ‘em a place to stay, because no one in this gym wants to see Jon Jones not have to fight a tough fight on April 23.”

It is quite the odd offer considering that ‘OSP’ would face Cormier for the light heavyweight championship if he did somehow beat Jones as ‘DC’ is rooting for. Training at his home gym of AKA would certainly give Cormier and his team a leg up on St. Preux’s tendencies, making it a win-win kind of scenario for ‘DC’ as he plots out his recovery and return to the Octagon.

Cormier acknowledged that for him to make another massive payday for the rematch against Jones, the troubled but still legendary has to look good defeating ‘OSP,’ yet he’s still willing to help give St. Preux a better chance to win:

“For my pocketbook, Jon needs to go out there and look great, but we want to give Ovince a chance, and every guy on my team, they’re willing to play a part in that.”

‘DC’ expounded on those feelings, noting that he would even be one of St. Preux’s coaches if and when he decide to take over his training camp, which Cormier described as finally reaching the perfect mix to break ‘Bones’:

“I’ll be one of his coaches. Listen, nobody wants to fight Jon Jones worse than I do. So if I can live through Ovince on April 23, I will live through Ovince on April 23. He can take my training camp. I thought that we had, finally the perfect mixture of what we needed in order for our preparations, so yes, Ovince can have my training camp, all paid for right out of my checking account. Ovince St. Preux, if you want to come to San Jose bud, you have a team in the American Kickboxing Academy that’s ready to support you.”

As for his own health, Cormier described his foot injury, which is a ligament issue, and also noted he would going to have stem cells put in his knee that has a torn ACL in addition to receiving treatment for a shoulder issue. Despite the injuries, however, he reassured fans he would do everything he can to get back into the cage as soon as possible:

“I’m pretty beat up right now as you would expect when you’re in the middle of a hard training camp, but I will do everything in my power to get back as soon as I can.”