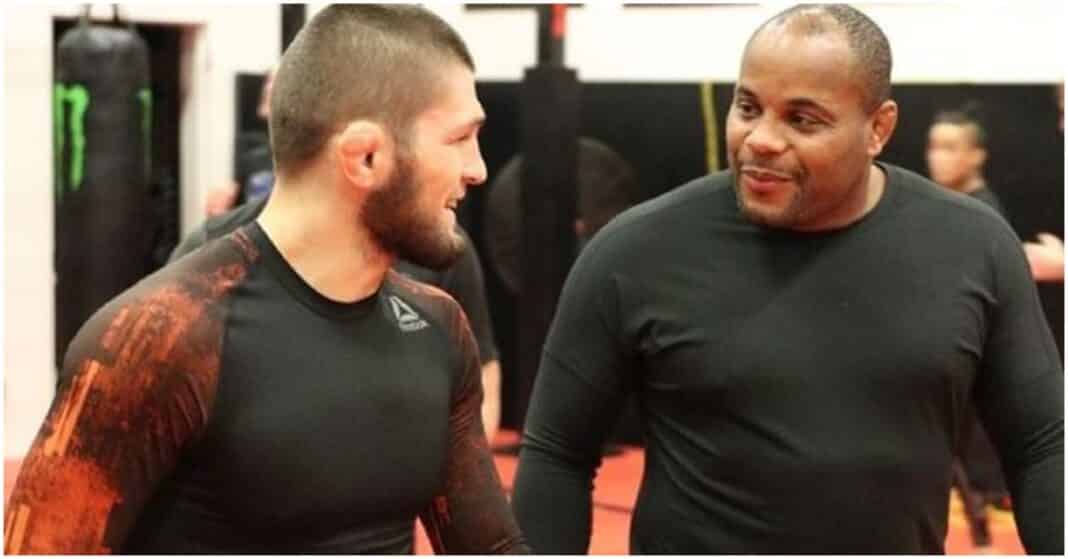 Daniel Cormier was full of praise for his teammate and friend, Khabib Nurmagomedov, one year on from the undefeated Russian’s retirement from MMA.

The former dual-weight UFC champion labeled Nurmagomedov ‘The Goat” and added that he could’ve retired at 50-0 if he chose to continue fighting.

“A year ago today the GOAT walked away from the game undefeated, undisputed champion of the world,” Cormier tweeted on Sunday night. “Miss these times brother and can’t wait to see you in Abu Dhabi. He could have gone 40-0, 50-0 or whatever he chose, he chose 29. No one was beating this man. @TeamKhabib #weareAKA”

‘The Eagle’ announced he would no longer compete after quickly submitting interim champ Justin Gaethje at UFC 254 on October 24, 2020. It was a shock announcement considering Nurmagomedov is very clearly peaking and just one fight away from stretching his perfect record to 30-0.

UFC president Dana White spent months trying to convince Nurmagomedov to fight on but his efforts were in vain. In January, the then 32-year-old solidified his retirement from MMA by relinquishing his lightweight title and removing himself from the USADA testing pool.

Nurmagomedov retired at the very top of his game and the sport. The undefeated wrestling specialist had choked out Justin Gaethje to unify the lightweight division. Prior to that, he picked up back-to-back submission wins over Dustin Poirier and Conor McGregor. Nurmagomedov also holds high-profile wins over the likes of Edson Barboza, Rafael dos Anjos and Al Iaquinta.

Despite his impressive resume, not everyone agrees with Cormier on Nurmagomedov’s GOAT status. Michael Bisping, who often works the UFC broadcast with Cormier, recently explained why Khabib cannot be considered among the best fighters in MMA history.

“Yeah, he took himself out of it (the GOAT debate),” Bisping said on The Pain Game podcast. “And if you look, yeah, he didn’t fight the best until the end of his career. When you compare that with GSP or Jones or Anderson, their run against world-class competition was far longer. But for Khabib, I know it was because of his father passing away, and he made a promise to his mother. So, it’s different circumstances.”

“But for those reasons, I think when you look at the resumes, even though he was undefeated, the resumes don’t really stack up,” Bisping added. “And I say that with tremendous respect to Khabib – Far being from me to downplay his career because I would never dream of doing that.”

Do you agree with Daniel Cormier? Could Khabib Nurmagomedov have gone 50 fights without defeat if he continued his career in MMA?