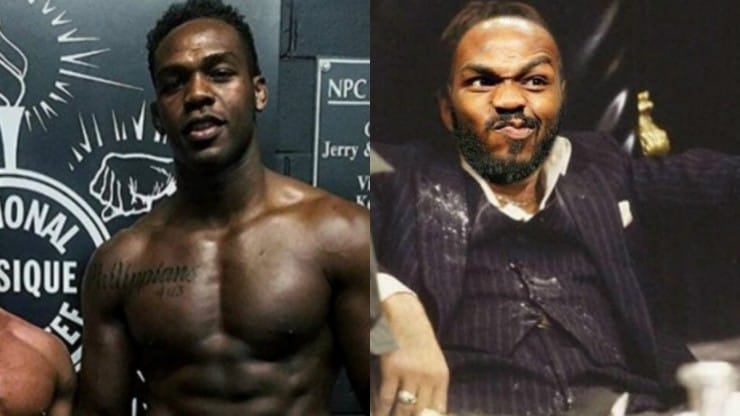 Having recently been reinstated by the UFC following a year full of controversy, former UFC light heavyweight champion Jon Jones has been raising eyebrows all over the web with his newfound physique as he prepares to tentatively face archrival Daniel Cormier in the main event of the UFC’s New York debut on April 23, 2016.

“Bones,” who is still serving a delayed sentence for his felony hit-and-run arrest in New Mexico last April, has been pulling off seemingly insane stunts like deadlifting 600 pounds, an unheard-of feat for an athlete who was mainly known for finesse, precision, and speed as he spread 205 pounds over a lanky 6’4″ pound frame.

But now Jones is focused on getting bigger and stronger. While that may seem like it could only build his fighting ability, Cormier stated during an appearance on today’s The MMA Hour that while it’s a good outlet for his addictive tendencies, it isn’t necessarily good for his chances in their rematch. Quite possibly the opposite, in fact. Check out what the champ had to say:

“The weight lifting stuff, honestly, look, Jon said he had some issue before with his alcohol and drugs. You have to replace that stuff with something. It seems as though his addiction is now weight lifting. And that’s not bad, you replaced it with something positive, something that can help you. Maybe he feels that by getting stronger it’s going to make him a better fighter.”

After a bad blood-filled feud in mid-2014 feud spurned on by their infamous UFC 178 media day brawl, Cormier eventually lost a decision to “Bones” in one of the promotion’s most hyped fights of all-time at January’s UFC 182. Despite his more lithe frame, Jones was able to outmuscle Cormier in the clinch, besting his opponent in their area of strength as he often does.

That’s why the current champ believes that if it wasn’t broke, there’s no need to fix it, and getting too bulky could actually detract from his trademark athleticism and agility in their rematch:

”The reality is, when I saw him getting so bulky, as a competitor, I thought, ‘Wow, this isn’t bad for me.’ Because the Jon Jones that was kind of skinny and not the bulkiest guy, it all worked. His body, the way his body was, it worked. It allowed him to have range, to have optimal speed and it allowed him for quickness and agility. With all the extra bulk, to me it was like maybe it will slow him down. Maybe he won’t be the fastest guy, maybe this guy is messing with what was given to him and the reality is, what was given to him has been perfect.”

It’s tough to argue with “DC” there, as Jones’ only loss in the UFC (or MMA) came via disqualification to Matt Hamill in a fight he was dominating. He went on to beat a who’s who of light heavyweight legends on his way to a record-setting run of title defenses, but now Cormier believes that messing with that recipe for success could mean the current crop of challengers has opportunity to catch up to the once-dominant “Bones”:

“The guy is 22-0, he’s beat the best guys the world has to offer, some of the greatest fighters of all time. And now he’s gotten bigger. So, for me as a competitor, you start messing with the recipe that is actually really, really good; maybe this opens up the door for some of his competitors.”