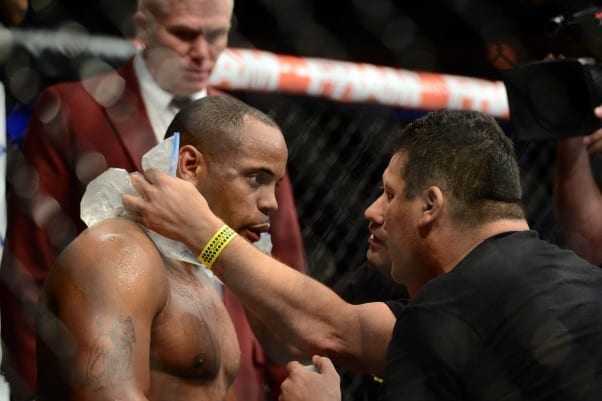 After a long series of narrow misses and disappointing defeats in the most pivotal competitions of his athletic career, Daniel Cormier finally reached the pinnacle of mixed martial arts (MMA) when he won the vacant UFC light heavyweight championship with a grinding third round submission over Anthony ‘Rumble’ Johnson in the main event of last Saturday’s (May 23, 2015) UFC 187 pay-per-view (PPV) from Las Vegas.

But an air of doubt still hangs over the legitimacy of Cormier’s reign, as he only got the opportunity to fight for gold again when dominant former champion Jon Jones was stripped of his title following an arrest on felony hit-and-run charges in Albuquerque, New Mexico.

Even though ‘DC’ dropped his first-ever MMA bout in a five round decision to ‘Bones’ at UFC 182 following a heated and emotional buildup, he still made light of Jones’ troubled situation by calling out the former champion after beating ‘Rumble.’ All legal business aside, ‘Bones’ didn’t exactly take it on easy on Cormier when he beat him, so now ‘DC’ apparently wants to do the same. During an appearance on yesterday’s episode of The MMA Hour, Cormier took the opportunity to needle Jones by stating he hopes he saw him win the championship:

Cormier then explained the reasoning behind his in-cage callout, noting that he dominated the man who many thought would finally topple Jones. However, Cormier also switched his focus to praise Jones, noting that if he already beat him, then ‘DC’s’ smothering win over ‘Rumble’ only proved just how good Jones truly is:

“Because he beat [me] like Jon just beat me and I just beat the guy that a lot of people thought was going to beat him,” Cormier said. “So I’m like, you know what, man? I still want to fight him. I want to challenge myself against the best guy. He’s good.

“More than anything, I think Saturday night showed how special the kid is if he can get himself and everything else in order. For him to have beaten me and for me to do what I did to Anthony ‘Rumble’ Johnson, that’s crazy man. So yeah, I want to compete against him. I hope that he does get it together so that we can fight again.”

The proposed Cormier vs. Jones rematch with ‘Bones’ as the challenger (odd as it sounds) would undoubtedly be one of, if not the, biggest rematches in UFC and MMA history, but Jones has a lot of legal red tape to sort out before that fight actually happens, which means Cormier may have to defend the championship one or more times before the potential blockbuster can be signed.

It’s still a foregone conclusion that ‘Bones’ and ‘DC’ will have their anticipated rematch one day. Has Cormier bridged the gap enough to beat Jones the second time around?