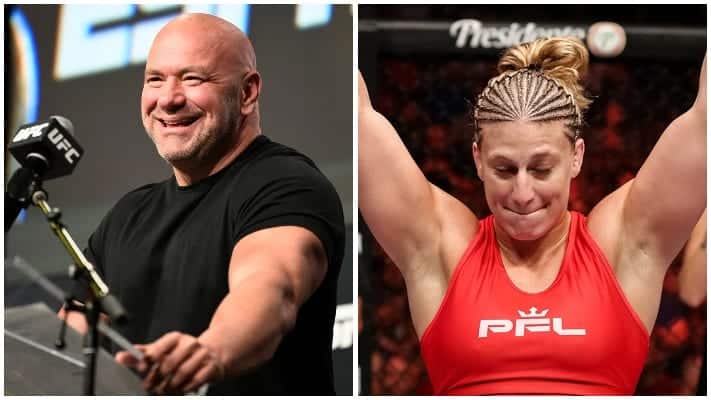 Dana White is not as opposed to signing Kayla Harrison to the UFC as many in the MMA world may have thought.

In a recent interview, White further clarified his stance on the PFL star when asked explicitly about her following her dominant season opener. (H/T MMAFighting.com)

The take clarified his earlier comments about Harrison, which some took as a jab at the PFL champ. White expressed doubt about whether Harrison’s team, not Harrison herself, felt she was ready to move on to the UFC.  Harrison responded to White’s original comments in kind.

Harrison is on a mission to repeat her title run and started the season with a brutal dismantling of Mariana Moraes. After the win, she made sure that everyone understood how she viewed herself in the tournament.

“This isn’t a tournament, it’s a coronation, and I’m the Queen,” Harrison declared in her post-fight interview.

With her contract ending at the end of 2021, the world of MMA is already buzzing about where she may end up when she enters free agency later this year. She has been incredibly supportive of the PFL as one of the promotion’s breakout stars. That said, she has also made it clear that she is unsure where she will land. Her manager, Ali Abdelaziz, has stressed that Harrison will weigh her options when the time is right, including anything that White and the UFC may offer.

“Nothing else matters,” he said. “She’s a PFL fighter. I have to promote PFL. I love Dana, but she’s a PFL fighter. She has to win the season, and we’re going to talk to PFL and everybody. PFL gave her an opportunity when she was nobody. They have say over what Kayla’s going to do, also. It’s not me and her. It’s all of us.”

Do you think Dana White will sign Kayla Harrison to the UFC in 2022?