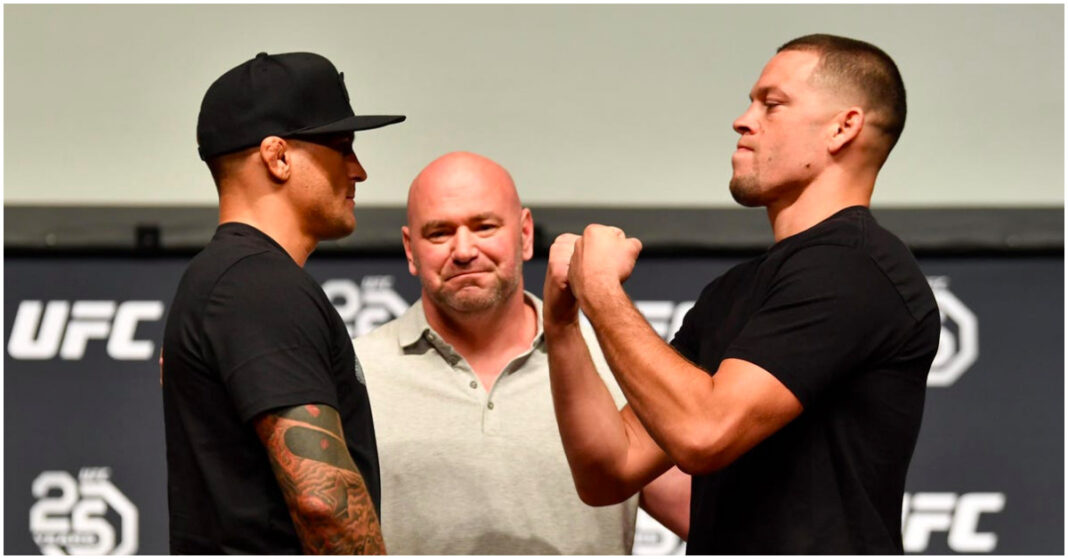 Nate Diaz says he’s ready to step back into the octagon and has his eyes set on Dustin Poirier and the boss has finally given his two cents on the possibility of a legacy fight happening.

The two stars have gone back and forth on social media quite a bit recently and the fight seems to be getting closer to becoming a reality. Diaz claimed Wednesday on Twitter that you could officially count him in for a showdown with ‘The Diamond’.

UFC President Dana White was asked about the chances of this fight coming to fruition in a sitdown with ESPN’s Brett Okamoto and while he didn’t shut down the chances of it happening, he mentioned that timing and contractual obligations always play a factor.

“Of course we’re interested (in that), I mean, this is what we do. You know, what happens is guys just wanna jump out of nowhere and say I wanna do this, I wanna do that. We have fights booked all the way up until May 2nd right now…We’re contracted to give guys fights three times a year, he’ll get a fight.”

Dana White Has Envisioned Diaz-Poirier Bout For A While Now

The future Hall-of-Famers were set to square off at UFC 230 but Poirier was forced out with an undisclosed injury, an event that has only added more fuel to the rivalry.

Despite holding a pro record of 21-13, Diaz is one of the biggest names in the sport and hasn’t fought since losing via decision to Leon Edwards at UFC 263. The fight was the first-ever non-title bout scheduled for five rounds and Diaz nearly stole the win from Edwards late in the fifth round.

Poirier most recently fell short in his bid for the lightweight title, submitting to champion Charles Oliveira via rear-naked choke in the third round.

Unlike UFC 230, it is likely the bout would take place at welterweight. With both fighters being out of title contention seemingly for good, cutting down to 155 doesn’t make sense for either man at this point.

Do you think Dana White will book Nate Diaz vs. Dustin Poirier?