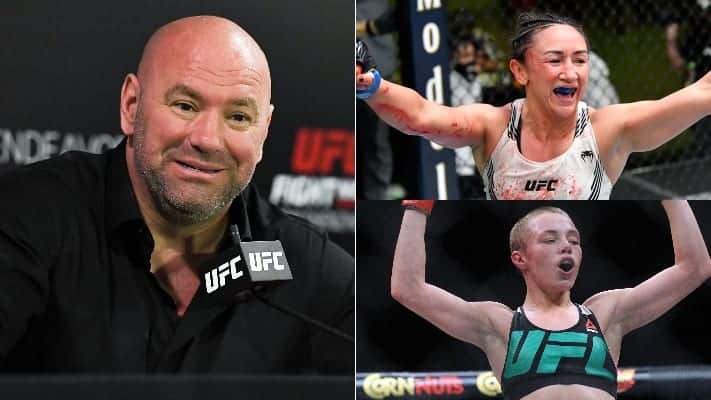 Despite Carla Esparza’s dominant performance on Saturday, Dana White doesn’t know if she’ll fight for the strawweight title next.

Esparza capped off a 5 fight win streak with a second-round stoppage over Yan Xiaonan. It was perhaps the best performance of Esparza’s UFC career, and added another impressive name during a run that includes Michelle Waterson and Marina Rodriguez, among others. Given that she is undefeated since 2019 while facing some of the toughest competition in the division, many assumed it would be enough to earn her a shot at regaining the strawweight title.

However, according to White, her current streak combined with the fact that she holds a victory over current champion Rose Namajunas still might not be enough for a title opportunity. With former champ Zhang Weili calling for a rematch, White is unsure what fight to make next (H/T MMA Fighting).

“She looked like a beast tonight,” White said about Esparza on the UFC Vegas 27 post-fight show. “She came out and absolutely dominated. You can tell by the way she was fighting that she was trying to make a statement. Statement made. Message received. We see you.

“I don’t know what we’re going to do next. If we do the rematch (with Zhang Weili) or if we give it to her.”

Given how dominant Esparza has looked as of late, it’s hard to see her get passed up for a title shot. While Zhang had an impressive run up to and during her title reign, she only had one title defense and was stopped by Namajunas in just over 1 minute. On top of that, it would make sense that Namajunas would want the chance to run back her 2014 fight against Esparza, which was for the inaugural strawweight championship.

white will no doubt spend the next few weeks deciding which route to take before making any official. Even if she isn’t offered the title fight next, Esparza sits in the most comfortable spot in her career since she held the belt.

Who do you think Dana White should book for the next title fight? Zhang or Esparza?