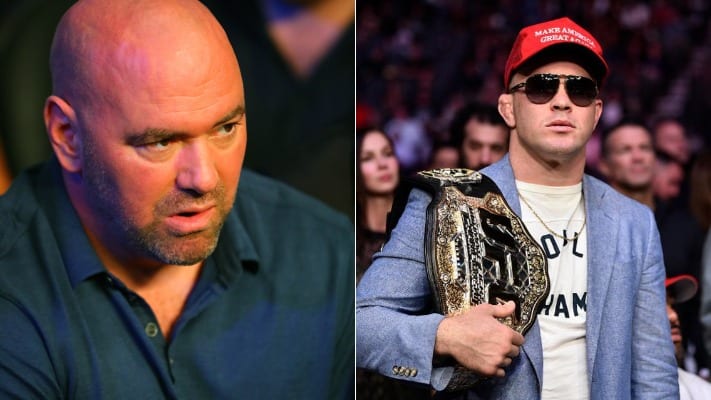 Last night (Sat. August 17, 2019) one of the biggest UFC events of the year took place. UFC 241 on pay-per-view (PPV) from the Honda Center in Anaheim, California featured several high-profile contests.

In attendance were numerous well-known UFC stars, including top-ranked welterweight Colby Covington. “Chaos” was seated cageside enjoying the fights. However, things had to be settled down, as Covington’s presence riled a few other fighters up.

“No, what happened was, everybody in that section was fighting with Colby,” White said. “So security kept coming over to me 50 times saying ‘We need to get him out of there.’ And I said, ‘No everybody needs to start acting like f*cking professionals because I don’t have another set in this entire building.

“Every seat in this place was sold out. So that whole section needs to stop starting fights with Colby. Right when I got there too, [Jorge] Masvidal was working his way down the line. [Max] Holloway had moved out of his seat so Masvidal could come into his seat. You know, that f*cking game that you play in kindergarten was going on over there when I went over there.

“So I asked those guys, ‘Listen to me, we got a big night going on here, we got a big fight. I don’t need a fight breaking out over here with you knuckleheads.’ Stop it.”

This doesn’t come as much of a surprise given how controversial Covington is. From his staunch support of current United States President Donald Trump to his brash trash talk towards nearly every fighter in the UFC, it would’ve been surprising had none of the fighters attempted to start something with Covington.

Coming off a dominant win over Robbie Lawler, “Chaos” is expected to challenge Kamaru Usman for the 170-pound title next.

What do you think about Covington riling up the fighters cageside at UFC 241?