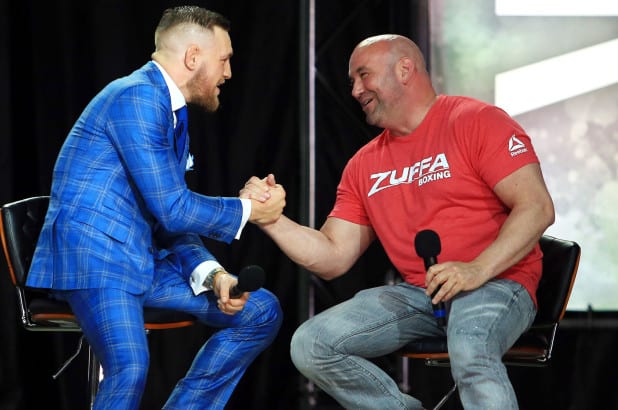 Dana White says UFC 229 is trending to become such a big event that is could do close to 3 million buys on pay-per-view, which is great news for the Las Vegas-based promotion. This is due to the huge payday that they are giving to former UFC lightweight and featherweight champion Conor McGregor.

Everyone had the expectation that the UFC would have to offer him a huge deal to fight against after his massive payday for his bout against Floyd Mayweather Jr. Also, he’s facing one of the most dangerous fighters that the UFC’s lightweight division has to offer in Khabib Nurmagomedov.

The UFC President recently spoke with Brett Okamoto of ESPN about this upcoming pay-per-view event that will see McGregor vs. Nurmagomedov headline. He noted that his early predictions would be for this show to break all previous records set for the promotion.

“This thing is breaking every record we’ve ever had as far as numbers go,” White said (H/T to MMANews) “I could just go on for days with numbers and how it’s scaling. It’s going to be big. I told you guys that we trending at 2 million pay-per-view buys. We’re closer to 3 million now. We’re trending close to 3 million pay-per-view buys for this fight.”

The UFC 229 pay-per-view event is set to take place on Saturday, October 6, 2018 at T-Mobile Arena in Las Vegas, Nevada. Historically, the Las Vegas-based promotion likes to have big names and at least two title fights on each card that they present as a PPV event.

Obviously, the promotion needs these things in order for not just the hardcore but casual fans decide to shell out money in order to watch it. Make no mistake about it, this is a pretty good card but it is being hyped as a traditional fight event as heavily pushing the headlining fight to the public in advertisements. Tony Ferguson vs. Anthony Pettis in a lightweight bout will co-headline.