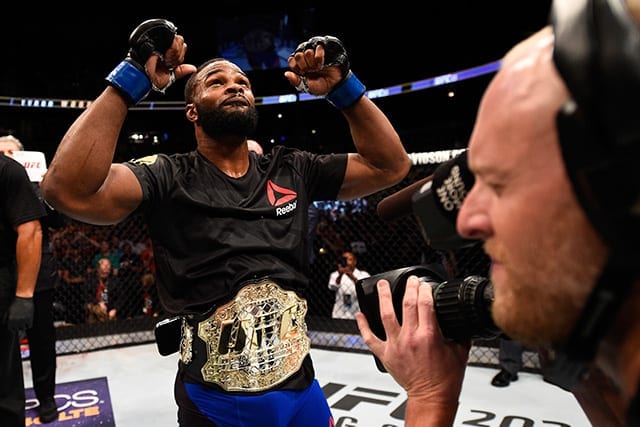 The MMA world got some exciting news – in many different forms – this week, and part of that was the interim welterweight title fight between Rafael dos Anjos and Colby Covington at May’s UFC 224 from Rio de Janeiro, Brazil.

Apparently still recovering from shoulder surgery, current 170-pound champion Tyron Woodley questioned the need for another interim belt, but it was reportedly due to him turning down an opportunity.

Although he did fight in four title fights in just under a year from July 2016 – July 2017, Woodley has been out since undergoing a procedure for a torn labrum suffered in his incredibly boring decision win over Demian Maia at last July’s UFC 214.

And according to UFC President Dana White, “The Chosen One” likely won’t make his return to the Octagon until August 2018 at the earliest:

“Tyron Woodley, we were trying to get him to fight,” White told UFC Tonight. “He came back with a doctor’s note that says he is injured and cannot fight until August.”

Prior to his victory over Maia, Woodley had successfully defended his title twice against Stephen Thompson, fighting “Wonderboy” to a majority draw at UFC 205 and winning a decision in their rematch at UFC 209.

Upon his return, it’s likely that Woodley would take on the winner of the bout between dos Anjos and Covington, but the welterweight division is moving forward as a whole as well.

For example, Kamaru Usman will face off against Sanitago Ponizinibbio in the main event of UFC Fight Night 129 on May 29, 2018 in Chile.

Then, Thompson and rising contender Darren Till will meet in the main event of UFC Fight Night 130 on May 27, 2018 in Liverpool.

Which fight are you most looking forward to and who would you like to see Woodley square off with upon his return?