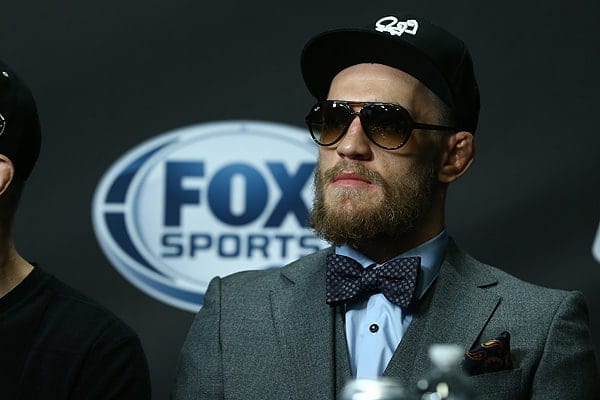 So it looks like some of our predictions were accurate in regards to a Conor McGregor title shot….

UFC featherweight Conor McGregor finds himself in quite a unique position after UFC 178; “The Notorious” bashed “Diamond” Dustin Poirier and made it look easy, leapfrogging Poirier to number five in the stacked division. The question is, how many fights away is McGregor from a title shot?

According to UFC president Dana White, the Irish bad boy is the next logical contender to Jose Aldo. Check out the interview with White, from the latest UFC Download:

“Here’s the thing: If you go down the list, every one of those guys has fought Jose Aldo already, Conor hasn’t. So who do you line up next for the champ other than Conor? Everybody else has fought him.”

So things just got a little bit more interesting; if Chad Mendes beats Jose Aldo at UFC 179, then McGregor may be fighting again while the contenders to the new champion get their crack, but “The Notorious” would be next in line if Aldo makes it a clean sweep of the division’s top four? Ricardo Lamas, Chad Mendes, Cub Swanson and Frankie Edgar have already been beaten by Aldo.

So what if McGregor is given a title shot with his first top 10 win? What impact does that have on the scene at featherweight? Well, for starters Cub Swanson and Frankie Edgar won’t be very happy about it, and it certainly cements the belief that rankings are nothing more than a number next to a name. But what of guys like Swanson?

“Beautiful Destruction” would be on a seven-fight win streak if he beats “The Answer”at UFC Fight Night 57, and a win over the former lightweight champion is no easy task. He would likely be promised the winner of the potential Aldo vs McGregor title fight, but may have a few things to say about it in the meantime.

Is it too early for a  McGregor title shot, or will “Money” clear this up at UFC 179?